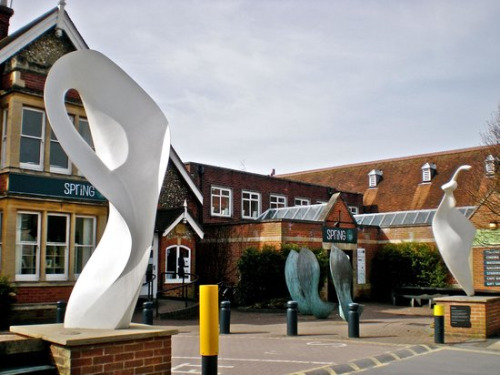 Brighton. 1963. An engagement party, a mobster back from the dead, a lover on the run from the law, a girl in man’s clothes, a geriatric waiter and trapped in the middle of it all Francis Henshall a washboard player with two bosses and a desperate need for some chips!
Richard Bean’s adaptation of the classic Goldoni farce took the world by storm and launched James Corden’s career, the mix of whip-smart writing and high speed slapstick proving irresistible!
For obvious reasons then, taking on this play is a huge task for any company and Humdrum manage it with aplomb, director Sam Sampson keeping the action going at high speed, making use of period music rather than the live skiffle band of the original production and even popping up onstage as the aforementioned waiter due to the indisposition of one of his actors.
In the central role Darren Gilmore gives a tour-de-force performance, regularly diving into the audience to beg help or berate, his desperation as his mounting lies continually crumble only to be replaced with ones even more far-fetched is pithed perfectly!
Elsewhere in a cast who are pretty much faultlessly cast Kerri Jeffrey is sweet and intimidating in equal measure as the lover on the run impersonating her dead brother and employing Francis as her minder, while Mikey Palmer is gloriously funny as the other guvnor dishing out violence on his new batman while reminiscing of his days at boarding school. Peter Colley and Kerrie Davey both display a keen knack for conversing direct with the audience and making the most of their moments stepping out of the action and, well the cast are all ace but if I don’t rein myself in this could become a very long review…
If you need a laugh (and these days who doesn’t?) this is just what the doctor ordered so get yourself along to The Spring!