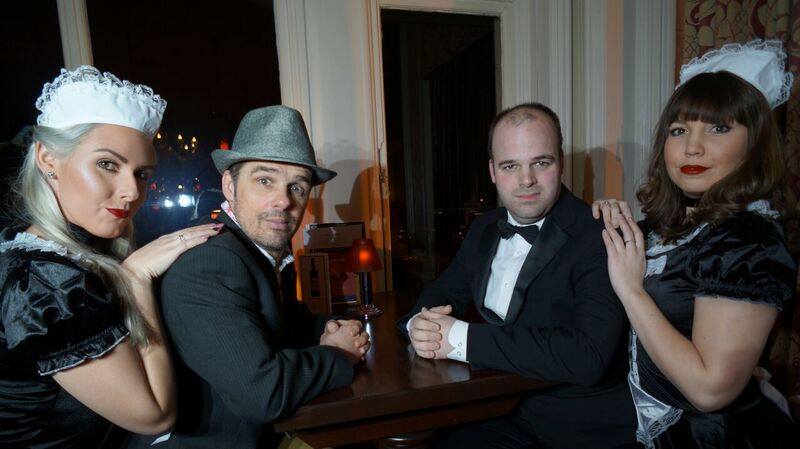 Portsmouth’s CCADS have long built up a reputation for presenting local premieres of big musicals and intriguing plays, all  in their own distinct style. They’re back with one of the biggest new musicals of the last few years!

Two con men, a beautiful woman and the elite of the French Riviera collide in this sexy and irreverent farce.
Dirty Rotten Scoundrels, based on the hugely popular MGM film starring Michael Caine & Steve Martin, takes us to the French Riviera for high jinks and hilarity. Sophisticated, suave and with a good dash of mischief, this hysterically funny comedy features a delightfully jazzy score by David Yazbek (The Full Monty) and was nominated for a staggering 11 Tony Awards on Broadway before its smash-hit West End run that starred Robert Lindsay & Rufus Hound.

Lawrence Jameson makes his lavish living by talking rich ladies out of their money. Freddy Benson swindles women with fabricated stories about his grandmother’s failing health. After meeting on a train, they attempt to work together only to find that this small French town isn’t big enough for the two of them. They agree on a settlement: the first one to extract $50,000 from a young female target, heiress Christine Colgate, wins and the other must leave town. A hilarious battle of cons ensues that will keep audiences laughing, humming and guessing to the end … .

CCADS Theatre promises a laugh out loud funny, tuneful and visually spectacular night of song, dance and humour, featuring a cast of the area’s finest, award-winning talents backed by a full orchestra and performed on stunning sets.
CCADS Artistic Director John-Paul McCrohon once again takes on double duties – fresh from recent Curtain Call award wins as Best Director of a Musical and Best Actor in a Musical for ‘Into the Woods’ – as he both directs and follows in the illustrious footsteps of David Niven, Michael Caine, John Lithgow, Jonathan Pryce and Robert Lindsay in the role of Lawrence Jameson. He is joined by an array of familiar faces from the local scene, many award-winners and nominees included, notable amongst which are Pete Westmorland, Lauren Kempton, Danny Owen, Kerry McCrohon and Charlotte Thomas.
The creative team is completed by Louise Helyer – recent ‘Best Musical Director’ award winner – and the ‘Cats’ choreographic team of Lydia Thorne and Charlotte Williams.
In addition to undergoing intensive rehearsal, the cast have been out and about promoting the show – notably at a special event in collaboration with one of Southsea’s hottest new venues, Café au Cinema, at which leading cast members performed numbers from the show before introducing a screening of the original film, and at a special photo shoot hosted by the Queen’s Hotel.
Following CCADS’ WOW 24/7  ‘Best Production’ award-winner ‘The Ladykillers’, the company is proud to once again bring comedy to a theatre that, in past years, has housed the legendary likes of Laurel and Hardy, George Formby, Frankie Howerd and Noel Coward to name but a few.
This is a show that will appeal to theatregoers and non-theatregoers alike  – and which has one foot in the screwball musical comedies of yesteryear as well as a foot raucously and outrageously in the present! A great night is guaranteed for all … BOOK NOW for the funniest musical you will see this year!

Concessions – £2 off all Dress Circle and Stalls seats