Shakespeare In Love @ The Noël Coward

It is with a little trepidation that I take my seat at the Noël Coward theatre ready for Shakespeare In Love to begin. I was last here for the Michael Grandage Season’s consistently excellent offerings, so will this new play match up? More to the point will it stand up to the film, a long time personal favourite?

The answer, almost immediately, is yes. The entire cast surround Will Shakespeare as he tries to put together a sonnet. But what should he compare his subject to? He struggles, his muse is gone. Thank heaven for his good friend Kit Marlowe.

Even before the actors have taken to the stage the set is eerily familiar. A framework of wooden balconies and balustrades, it resembles The Globe or The George Inn in Southwark and is mercifully uncluttered, allowing the performances to set the scene for themselves.

In the title role Tom Bateman relishes both the comedic and dramatic moments in the script. His easy charm and swagger perfect for the cocksure young playwright and his relationship with David Oakes as the smart and sensitive Marlowe is excellent, the latter’s soft spoken delivery and easy manner immediately endearing him to the audience. 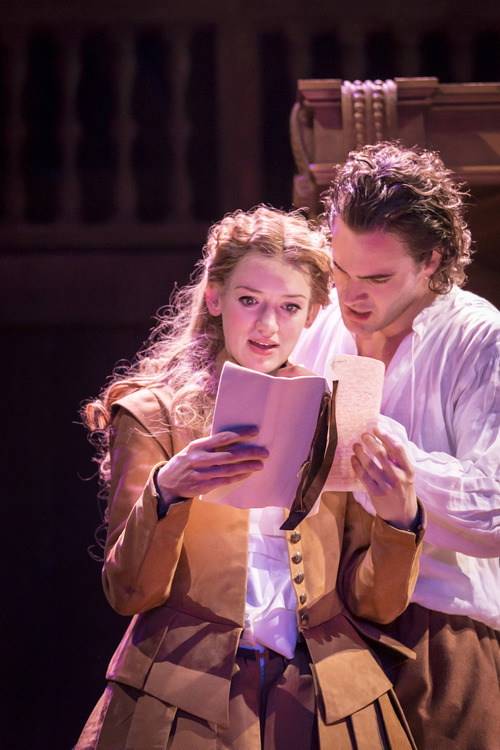 Lucy Briggs-Owen’s wide eyed and innocent Viola is another excellent characterisation. Her realisation that her life is being reflected on the pages Shakespeare writes is a wonderfully dramatic moment.

Elsewhere there are a number of fine comic performances, Paul Chahidi’s nervous, twitchy Henslowe and Ferdy Roberts’ belligerent theatre-lover Fennyman work brilliantly together and Colin Ryan’s Webster is a masterful example of making the most of a smaller role. In fact, even during a raucous stage-wide brawl you’ll find your gaze drawn to him again and again.

Much like the movie on which the show is based, there are plenty of jokes here built around Shakespeare’s works and characters. Some very obvious, some that will pass most of the audience by, but all very, very funny! Declan Donnellan’s direction ensures the audience feel part of the action as cast members appear t the edges of the stage, watching the plot unfold.

In fact, this is just about everything you could want from an evening’s entertainment: Comedy, love… and a bit with a dog!

One thought on “Shakespeare In Love @ The Noël Coward”