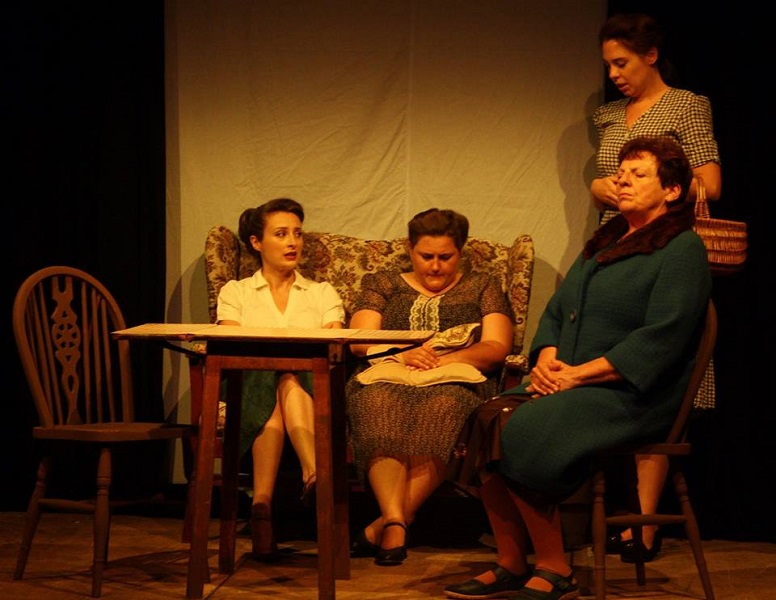 Stephen Lowe’s Touched is a curious play… flat on the page, it comes alive on the stage! Lowe’s story of a trio of sisters, their friend and family and the curious time between VE day and the end of the war perfectly highlights the struggles these women had to face, and the freedom they were about to lose!
Humdrum have long had a reputation for performing intriguing, often esoteric, pieces but Touched is the sort of play that works for a range of audiences, Lowe’s naturalistic dialogue, the simple plot and the subtle, understated direction all allow the core trio of ladies to flow through the play, carrying the audience in their wake.
Of course, all this would amount to nothing without a cast capable of pulling it off and director James George has assembled a wonderful ensemble, eschewing casting to the written age of the character in favour of finding the performers best able to embody them. 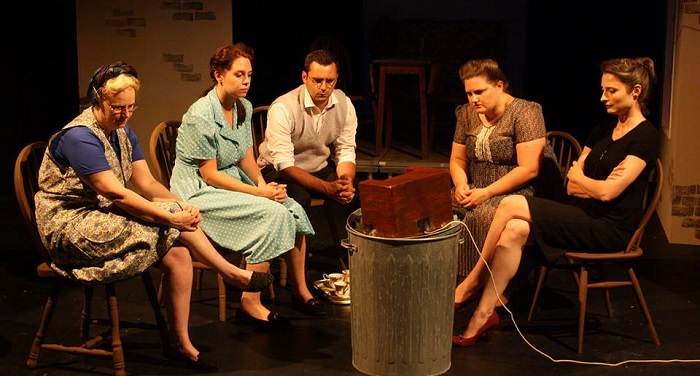 Gemma Valler is superb as Joan, the eldest sister who might enjoy dalliances with American airmen to “support our allies” but is determined to see the best in and do the best for her siblings. Valler slips effortlessly from cutting wit to some truly delicate moments with ease, having to shoulder the brunt of the early humorous scenes and share the most impactful moment.
As youngest sister Betty, Emma van Kooperen revels in the characters highs and lows, prone to moody sulking one minute she flips to wide-eyed and hopeful expectation perfectly and shows that, despite being the ‘baby’ of the family she has a fierce sense of right and wrong! As the only character who seems truly happy to see the war end, her final scene – realising her dream might just be coming true – reminds us that after all the devastation and suffering, the country rallied and prospered again!
The character we follow most closely is Sandra, the middle sister who seems lost in the maelstrom of celebrations and is clearly carrying a secret she’s scared to share. It’s a role of extremes that could easily become caricature but Leila Millson finds the through-line and successfully grounds herself in an incredibly brave and moving performance!
The other constant, always on the fringe of the family dynamic is Johnny, a young man excused from going to war and who is desperately looking for love. Mike Gondelle shows us just how much he cares for all the sisters and finds warmth in a role that could all too easily be creepy!
Elsewhere there are strong performances in a number of roles, with special mention to Jeanette Broad’s fiery but loving Mam and a scene-stealing moment from Mackenzie Gilmore as Joan’s son Alfie.
This might be a play thin on plot but it has heaps of heart and a quartet of perfectly formed performances at its core!