Me and My Girl @ Chichester Festival Theatre 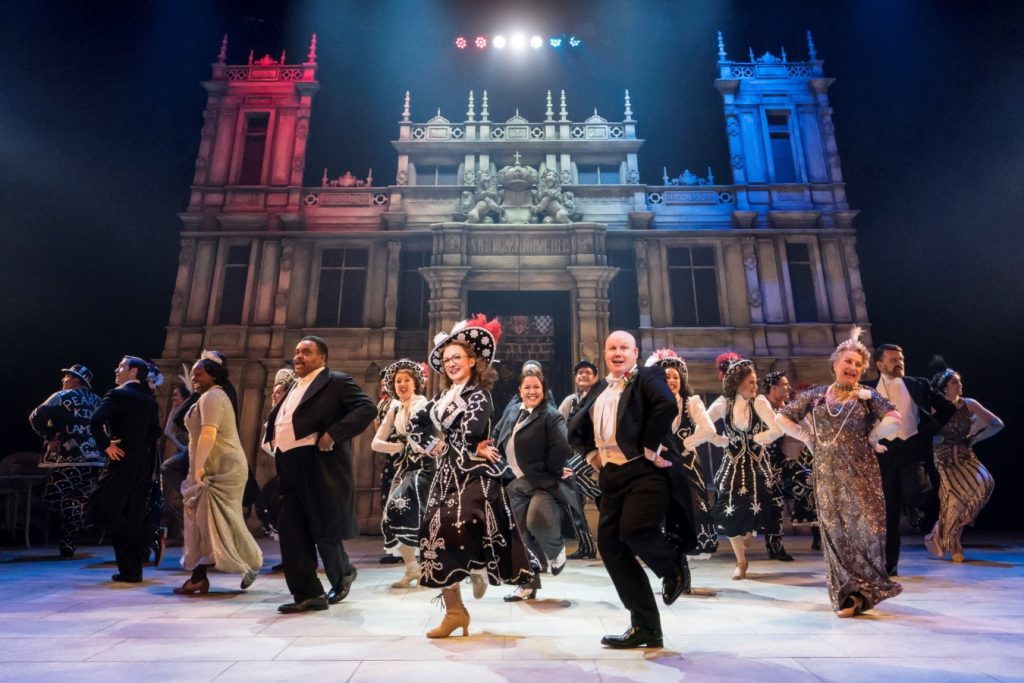 Chichester Festival Theatre’s summer musical is always hotly anticipated and this year is no different. Me and My Girl, set to star Matt Lucas as barrow boy turned peer Bill Snibson. Sadly, as we’re informed just before the start of the show Lucas has been ordered by a throat specialist to rest and with a few hours’ notice his understudy is set to take the stage!
Thankfully we’ve been very lucky with seeing understudies who exceed our expectation of the names they replace (see Ria Jones in Sunset Boulevard) and Ryan Pidgen is no exception, a bundle of energy and charm who lights up the stage with his presence. Pidgen is not only word perfect but he has a wonderful rapport with the rest of the cast and seems a natural in the role. In fact it would be no shame if he were to carry the rest of the run!
He’s surrounded by talent too, not least the glorious Alex Young, the true heart of the piece as Sally, Bill’s love whose warmth and charisma make it easy to understand why he might turn his back on a fortune! Young is utterly charming and in a fairly fluffy show gives Sally a huge amount of depth. She’s also very funny, both in delivering lines and in her reactions to Pidgen as they share opportunities to get a rise out of the audience. She even darts into the crowd at one point, chatting to audience members (and giving my beard a squeeze as she passed).

There’s no let up elsewhere either, Caroline Quentin is a revelation as the aunt who stands between Bill’s money and his happiness. We all knew she could act but where has that voice been hiding! She forms a great team with Clive Rowe who is a delightful foil as Sir John.
Perhaps the most famous set piece of the show, the sofa-seduction of You Would If You Could is transported to the bathroom. Siubhan Harrison vamps it up magnificently as Lady Jacqueline! The sometimes overlooked role of Parchester the solicitor is utterly transformed too with the inspired casting of Jennie Dale who revels in the lunacy of repeatedly announcing herself with her own theme song!
Talking of songs, there are so many, fired in such rapid succession that you’ll be hard pushed to emerge from the theatre without your feet tapping and a tune on your lips. From the wistful and lovely Leaning On A Lamppost to the heart wrenching Once You Lose Your Heart and of course the outstanding Lambeth Walk, a dazzle of tap shoes, sequins and beaming grins with glittering choreography by Alistair David.
In Sheffield Daniel Evans made a name for himself with dazzling musicals that were, for all the razzamatazz, full of heart and he’s done the same here, taking a show so familiar and finding a whole new range of nuances within it. The world can be a pretty depressing place, but in this auditorium, for a couple of hours, you can sit back and smile from ear to ear, this really is pretty much perfect!

At Chichester Festival Theatre until August 25. Visit cft.org,uk for details.