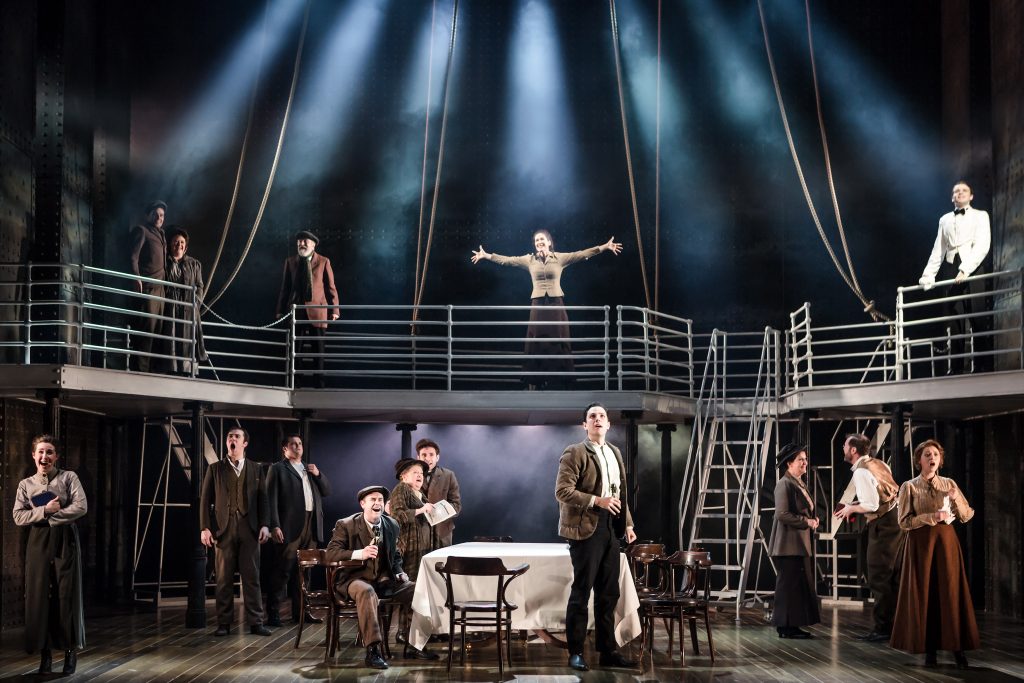 Every now and again a show comes along that makes the hairs on the back of your neck stand up. It might not be something new, but it just catches you and you fall in love with it. When Titanic the Musical opened at Southwark Playhouse back in 2013 it was received rapturously… but I didn’t see it. When it was transferred to Toronto for a limited season it thrilled the Canadian theatre crowd… but I still didn’t see it. When it launched director Thom Southerland’s first season at Charing Cross Theatre I made sure I was there (and you can read that review here) and that was it, I was hooked!
Now the show has set course for a national tour, starting, as the ship itself did, from Southampton. A show I loved at one of my favourite theatres, how could I not be there to see it? I’ll be honest I was intrigued to see how this intimate production would take to the cavernous stage of the Mayflower Theatre. I needn’t have worried, the simple set has expanded a little but this is still a character driven musical and still creates a space that is cosy at one moment and claustrophobic the next.
Maury Yeston’s stunning score rises and crashes like the ocean, music that brings a tear to the eye with a love song, plasters a smile on your face with a jaunty dance number and leaves you openly weeping at the tragedy that befalls this city of the sea.

The night was alive with a thousand voices…

The show is brought to life by a stunning troupe of performers, many returning from previous runs and some who have stuck with the show throughout. Their voices soar over the audience and they swing effortlessly from the booming Godspeed Titanic to the hushed tones of No Moon. There isn’t an off performance in the bunch and they’re a delight to watch!
Philip Rham, Greg Castiglioni and Simon Green as, respectively, the captain, builder and owner of the ship form a formidable trio, the sailor and the businessman fighting for superiority as the engineer frets over his creation. Their fallout as the ship takes on water and blame is thrown from one to another is perfectly pitched.

The passengers often have to represent an entire class with one or two characters, but we still see fully formed people. Claire Machin’s second class passenger who tries to mix with the hoi polloi is a pleasure and Victoria Serra dazzles as the young woman fleeing Ireland, pregnant and desperate to find a husband and a future. Along with Emma Harrold and Devon-Elise Johnson they form a trio of Kates and lead Lady’s Maid, a number that reminds us of the hope that caused so many to cram into the third class cabins and sail to the States. Dudley Rogers and Judith Street as Isidor and Ida Straus might just be the heart of the piece, their understated performances are utterly charming!
Elsewhere there are some lovely performances among the crew. Matthew McKenna’s Etches, Lewis Cornay’s Bellboy and Kieran Brown’s haunted Murdoch are all wonderfully fully formed. Niall Sheehy reminds us of the crew below desks with his lovesick stoker and forms a touching friendship with Oliver Marshall‘s introvert communications officer.

It’s not often you see a touring production greeted with a standing ovation but as one of the many on their feet I can say it was thoroughly deserved. Shows like this simply don’t come around often enough and you should do everything in your power to see it!

Now, can we have a tour of Grand Hotel please?

In Southampton until Saturday and then on tour. For more information visit http://www.titanicthemusical.co.uk/