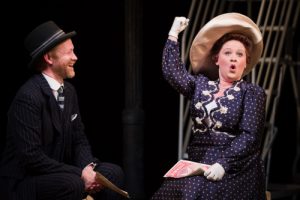 Can I start with a confession? I never really “got” Titanic… Sure, Maury Yeston’s music and Peter Stone’s book had the requisite bombast, but I’d never seen much evidence of the heart. Leave it to Thom Southerland and Danielle Tarento to prove me wrong again as they did with Grand Hotel last year… Maybe next time I’ll have learned my lesson!

At once a poem
And the perfection
Of physical engineering.

We all know the story of Titanic, it’s etched into the minds of everyone in some form or another, but here it’s really the story of people and told without a note of Celine Dion to be heard! This is a love story told in many forms and with many results…
Firstly we have the men who love this seemingly indestructible vessel, Ismay who owns her, Andrews who designed her and Captain Smith who guides her. Each in their way has staked their claim to the ship, from Ismay’s wonder at her in In Every Age (beautifully delivered by David Bardsley) to the Captain treating her maiden voyage as his farewell to the sea.
There are conventional love stories too; each of the three classes of passenger are characterised by a couple. In first class Isidor and Ida Straus (Dudley Rogers and Judith Street) whose devotion to each other and to staying together to the end is guaranteed to have the audience weeping.
Down in second class the Beanes clash over the glass ceiling above them. Peter Prentice’s Edgar knows his lot in life while Alice dreams of rubbing elbows with the Vanderbilts and their like in the salon. When Prentice and Claire Machin come together there’s a gleam in their eyes that epitomises the hope and opportunity ahead for all the passengers at the start of the voyage! 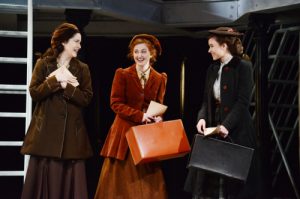 Below decks, for the 3rd class, it’s the hope of a new life away from Ireland (Lady’s Maid) that brings them all together and when the unusually forward Kate McGowan (Victoria Serra) asks Shane McDaid’s Jim Farrell for hishand it typifies the world they are hoping to find at the end of their voyage. Meanwhile Niall Sheehy’s stoker dreams of the girl he’s left behind and the hope of marrying her when he returns from New York.
Love crosses the class boundaries too, with Lady Caroline Neville eloping to marry below her station due to her love for Charles Clarke. Helena Blackman and Douglas Hansell both beautifully convey the stigma of their actions and the excitement of breaking away for the still pervasive air of Victorian stuffiness in I Give You My Hand. 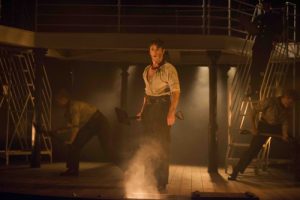 Act 1 brilliantly build the relationships between these couples and their love for each other… only to make the second act all the more devastating as so many of the couples are split and one pair make the brave choice to stay together and meet their fate. The most painful reminder of tragedy comes though from the stiff upper lip of the crew, typified by James Gant’s unflustered Etches who stares death in the face with quiet dignity while Scott Cripps’ Murdoch, unable to cope with the guilt of being in command of the bridge as the ship grinds against the iceberg, takes his own life.
Amid all this the most poignancy comes not in song or through the acting of the cast but when suddenly we’re plunged into silence and confronted with the names of the 1,517 people who died on that fateful night. I defy anyone not to be moved in that moment!
I could go on enthusing about this production and listing the cast I’ve not yet mentioned (they all richly deserve the recognition) but suffice to say that every person in the Charing Cross Theatre took to their feet in rapturous applause at the finale and I daresay a few, like me, were once again wondering just how Southerland and Tarento can keep getting it so right!