The Taming Of The Shrew @ Shakespeare’s Globe 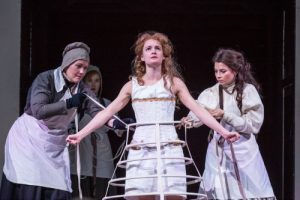 Shakespeare’s Globe’s Wonder Season is in full swing on Bankside, with the theatre becoming more and more of a fantasy world. I have to confess that The Taming Of The Shrew would not have been one of the plays I’d have picked for such a whimsical programme, but this production has a magic of its own!

Press week was delayed when Kathy Rose O’Brien was injured and unable to perform but, as we should expect in a year where Ria Jones and Natasha Barnes have stepped up and stolen the show in the West End, the person they’ve brought in seems perfect for the role. Aoife Duffin may seem tiny on the stage, but her personality fills the Globe to bursting point, whether roaring out freedom songs written for the production, dragging her sister across the playing space with a rope or violently relieving an itch Duffin demands your total attention. 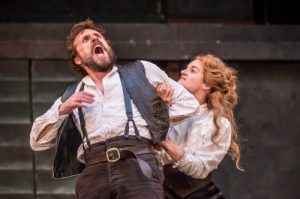 Director Caroline Byrne makes some interesting choices that paint this difficult play in an intriguing light. By setting the action in Ireland in 1916 the production is infused by the spirit of women getting the vote and the looming fear of the Easter Rising. It also means we get the delight of prose spoke in a range of lilting brogues.
Edward MacLiam prowls the stage as Petruchio and, while he is never physically violent to Kate, theirs is a painful relationship to watch. Where other productions treat their cycle of abuse with a nod and a wink here we see a man beating a woman down until she has retreated fully into herself. It’s painful to see this fiery young woman become an animal at her master’s bidding and stays with me long after I’ve left the theatre. 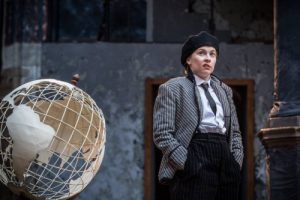 Thankfully there’s plenty of humour to offset the more difficult scenes here. Notably from lovelorn Lucentio and his servant Tranio. Aaron Heffernan bounds across the stage in pursuit of Bianca’s love. Disguising himself as a tutor he allows Tranio to take his name. As Tranio Imogen Doel provides boundless laughs and has a wonderful knack for sotto voce additions to the script that catch the watcher off guard and a wonderful range in facial expressions!
Kate’s younger sister Bianca is normally submissive and shows her love in response to her suitors but here Genevieve Hulme-Beaman makes her the mistress of her own destiny and just as impetuous as her sister, albeit without the sharp tongue.
This is a glorious production, often joyful (in no small part due to the band here who whip up a storm of a ceilidh before each act) but the mirror it holds up reminds us that the world is still far from equal and we can’t ignore that!