The Hound Of The Baskervilles @ The Spring 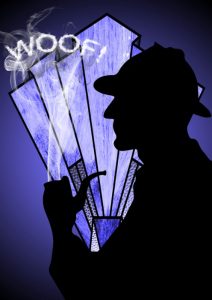 It was with great reticence that my wife and I approached The Spring ahead ofThe Hound Of The Baskervilles… not that we were apprehensive about the quality of the show, but because we were really, really (really!) early!

Thankfully the doors were already open for this wonderfully welcoming little arts centre so we made ourselves comfortable with a cup of tea ahead of the show itself.

I’ve long been a fan of Humdrum, their happiness to perform a very wide and varied mix of shows means there’s always something of interest coming up! As an avowed Holmes fan this was one I was particularly looking forward to. I was wrong… this wasn’t a mere fun night out… I cannot remember the last time I laughed so often and so heartily in the theatre and Emma was in such constant hysterics that I suspect she may have left a damp patch on the seat!

So, why were we guffawing like a pair of inmates from the asylum? Quite simple really… a very funny script performed with aplomb by three extremely capable performers!

From the off, Hound breaks the fourth-wall with Lewis Bailey stepping out of character to introduce himself and his colleagues, before diving into the show proper and hurtling along at a breakneck pace… costumes are changed in the blink of an eye as all three men delve into a number of roles. When Jonathan Fost disappears as Holmes and pops up a moment later in a curly blonde wig and long dress I struggle to hold myself together… in such an intimate space you can see every gesture on the actor’s faces, making things even funnier!

Tim Sturton-Davies as Sir Henry Baskerville (among others) often acts as the straight man, allowing the other two to ascend to new heights of silliness around him, but he has moments of genuine hilarity in his own right too… particularly when he steps out of character and starts playing himself!

The real belly laughs come from the growing realisation that we are watching a very different Dr Watson than we have seen previously, Lewis Bailey (one of our favourite actors), turning in a sublime performance and controlling the entire audience with the slightest twitch of an eyebrow. The relationship between his character and Fost’s Holmes is much more than it seems as well, and it builds brilliantly throughout the piece.

James George and Sam Sampson’s direction wisely keeps everything very contained, the almost cramped atmosphere simply leading to more opportunities for laughs and the pace allowing the audience no respite between laughs!

Despite act 1 clocking in at a shade under an hour, the company make sure that you’ll be up to speed after the interval by hurtling through a frankly genius 5 minute re-tread of everything that has happened previously and from there descend into more silliness than I could possibly put into words.

Frankly, the best thing I can do is to urge you to head along to The Spring for yourself… I promise you these three gents will reward you with the funniest night’s entertainment you’ve had in a very long time!