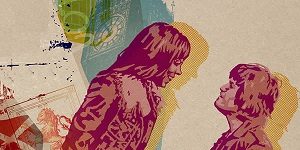 We’re always on the lookout for new shows that pique our interest and one that leaps out at us right now is ROOMS. An off-Broadway hit last year, this rock musical will be making it’s European premiere at the very lovely Finborough Theatre.

Set in late 1970’s Glasgow at the height of the punk rock movement, ROOMS tells the story Jewish singer-songwriter Monica who finds her professional and personal life becoming entangled with that of reclusive rocker Ian. They write and perform together and find themselves moving from the dingy clubs of Glasgow to the bright lights of New York City. Inevitably their personal and work lives pull in different directions and important decisions will need to be made!

With a powerful score by Scottish Composer Paul Scott Goodman and a lean and punchy book by Miriam Gordon, this production also has the backing of a top creative team including Andrew Keates as Director, choreography from Sam Spencer Lane and Mark Warman in the MD’s chair.

Check out some press quotes from Rooms’ New York run:

“ROOMS may well be the musical for this new era. Spare and briskly paced, ROOMS has a cast of two and a seriously hopping five-piece band. ROOMS shines not with glitz, but with that rarest of attributes in the realm of musicals: emotional honesty.” Flavorpill

“Hit alert! Hit alert! This is a musical for all ages. An unconventional love story that bridges the traditional and the new. ROOMS is well structured, well written, has a charm and wit all its own – and it rocks!” Talk Entertainment

Tuesday to Saturday Evenings at 7.30pm.

Saturday Matinees 3.00pm (from second week of the run).