It’s an accepted cliché that, whatever the prevailing political mood there is a Shakespeare play that adequately reflects, comments on or holds a mirror up to it. Like all the best clichés it has become so ingrained in the consciousness of theatregoers because it is largely true. Thus at a time when we worry about the power of world leaders like Trump and the ability of political parties with extremist views to gain momentum Julius Caesar seems incredibly apt. 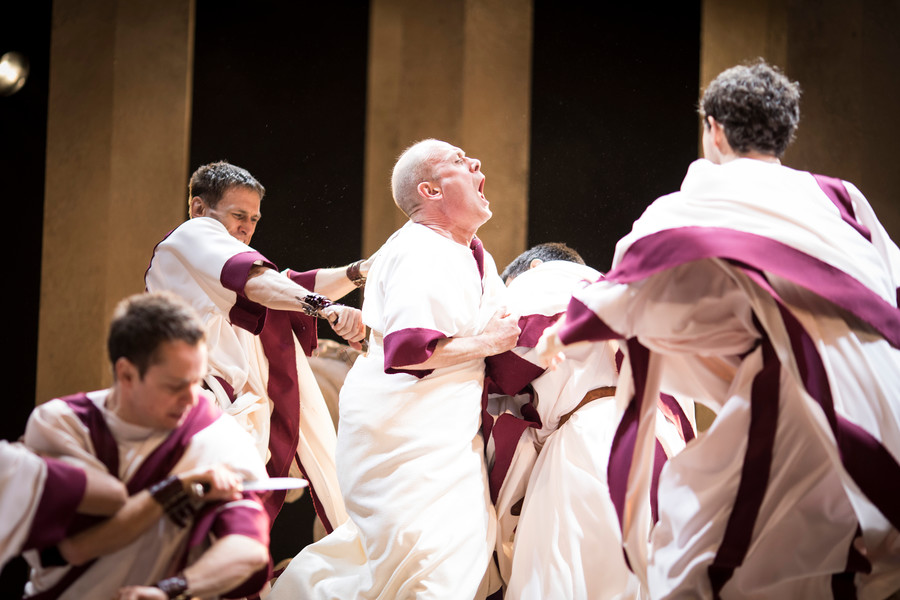 As the first play in the Royal Shakespeare Company’s Rome season there’s pressure on this production to set the momentum for a year of plays sharing the same set. Angus Jackson’s take opens well, a barely lit stage highlights young romans performing the rituals and games that lead to the Lupercal festivities of the opening scenes. He’s helped by Andrew Woodall’s imperious Casear, towering over people, always on the verge of a sneer. His height allows him to literally look down his nose at those around him and his insouciant flicks of the wrist are the ultimate dismissal of the proletariat.

Of course this is a play that hinges on the audience being able to understand the motivation of both parties as the action pans out and here Jackson’s cast work their magic. Martin Hutson is magnetic as the shrewd Cassius, his take on the character is just as much a schemer as any I’ve seen but unlike some other takes he truly believes the ends justify the means! As his willing compatriot Alex Waldmann sells Brutus’ duality perfectly. While he truly loves the republic he is, even to the end, torn by his personal relationship with Caesar. When, late in the play Brutus is alone in his tent you see the weight of his actions crushing him and Waldmann shows us just how close, on numerous occasions, Brutus comes to crumbling.
In the other camp James Corrigan’s Mark Antony is a shrewd operator, playing the people to his own ends and masterfully picking apart the conspirators. He’s callous too, staring on without emotion as one of his generals snaps the neck of Brutus’ serving boy.
Ultimately you’re left feeling that neither side is entirely right and despite Mark Antony being victorious the final image of his uneasy union with Octavius sets up the next play in the season excellently!

In Stratford until 9th September then at the Barbican. For tickets and more details head to https://www.rsc.org.uk/julius-caesar/