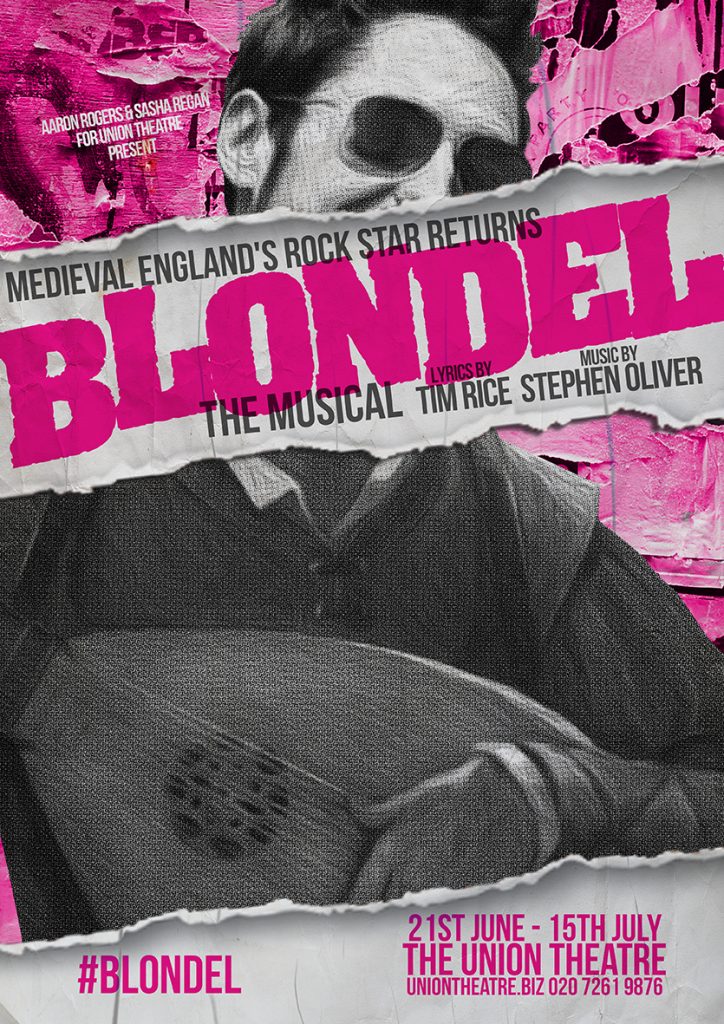 A brand new version of the Tim Rice musical comedy Blondel (long a guilty pleasure of those of us here in the Cheap Seats), which follows the trials and triumphs of an ambitious minstrel in King Richard the Lionheart’s court, will get its London premiere at the Union Theatre from Wednesday 21 June – Saturday 15 July!

Tim Rice said today: “I’m delighted Blondel is returning to the stage. It was one of the most enjoyable projects of my career, and I’ve always felt Stephen Oliver’s wonderful music deserved a larger audience than it reached back in 1983 when the show first ran. I hope this new production at the terrific Union Theatre will please old fans and find some new ones.”

WHAT’S THE STORY?
When King Richard announces that he’s off on a Middle East Crusade to give Saladin a piece of his mind (and sword), the struggling court musician Blondel is forced to stay behind to write songs in praise of the King’s evil – and ambitious – brother, Prince John. Worse still, Blondel is separated from his sweetheart Fiona, who has been press-ganged into the King’s official crusade dry cleaning dept. However when Richard is captured by the murky – and rather cunning – Duke of Austria (just before the interval), Blondel decides to embark upon a pan-European adventure to save his King, Fiona, and England. An irritable assassin, a proto-Robin-Hood and a quartet of monks all aid and/or hinder Blondel’s efforts to write himself both a place in history and love song to dedicate to Fiona.

PREVIOUS PRODUCTIONS
Blondel premiered in the West End starring Paul Nicholas in 1983. It was the first musical Tim Rice wrote with a composer other than Andrew Lloyd Webber, following hits with Joseph and his Technicolor Dreamcoat, Jesus Christ Superstar and Evita. Tim first had the idea for a show about the Crusades in the early days of his partnership with Andrew. They initially worked on it together, with the project titled Come Back Richard Your Country Needs You. That work was performed as an oratorio at the City of London School in 1969, and a single of the title song was recorded with Tim as lead vocalist. However their idea for a musical about the last seven days in the life of Jesus Christ took precedence. Then the idea for a musical about the Crusades sank into obscurity. Tim met Stephen Oliver, the distinguished classical and operatic composer, when they both served on a panel at the Sydney Arts Festival in 1977. In 1982 they began collaborating to bring the idea of a musical about King Richard into a reality. Now titled Blondel, the show centred around Richard’s minstrel, Blondel, who embarks on a quest to find his missing King.

Cast to be announced.

Tim Rice (book and lyrics)
Tim is an author and Academy Award, Golden Globe Award, Tony Award, and Grammy Award-winning lyricist. He is best known for his collaborations with Andrew Lloyd Webber, with whom he wrote Joseph and the Amazing Technicolor Dreamcoat, Jesus Christ Superstar, and Evita; with Björn Ulvaeus and Benny Andersson of ABBA, with whom he wrote Chess; for additional songs for the 2011 West End revival of The Wizard of Oz; and for his work for Walt Disney Studios with Alan Menken (Aladdin, Beauty and the Beast, King David), Elton John (The Lion King, Aida, The Road to El Dorado) and Ennio Morricone. One of the most celebrated lyricists in British popular culture, Rice was knighted for services to music in 1994. He has a star on the Hollywood Walk of Fame, is an inductee into the Songwriter’s Hall of Fame, is a Disney Legend recipient, and is a fellow of the British Academy of Songwriters, Composers and Authors.

Stephen Oliver (music)
Stephen Oliver (10 March 1950 – 29 April 1992) was an English composer, best known for his operas. His first opera, The Duchess of Malfi (1971) was staged while he was still at Oxford. Later works include incidental music for the Royal Shakespeare Company (including The Life and Adventures of Nicholas Nickleby) and over 40 operas, including Tom Jones (1975), Beauty and the Beast (1984), Lady Jane (1986) and Timon of Athens (1991). Oliver also wrote music for TV, including several of the BBC’s Shakespeare productions and some chamber and instrumental music. He also composed the score for the 13-hour radio dramatisation of Tolkien’s The Lord of the Rings, first broadcast on BBC Radio 4 in 1981.

Mathew Pritchard (additional music/music supervision):
Since starting out in the long-running NEWSREVUE at the Canal Cafe Theatre in 2000, Mathew has worked as musical director/arranger for numerous productions and cabarets. He provided a new musical arrangement for Blondel at the Pleasance Theatre in 2006 and has been involved creatively with the show ever since. He is delighted to be providing additional music for this production.

Tom Williams (additional book)
Tom is best known for his feature film screenplays, including Chalet Girl (2011) and the BAFTA-nominated Kajaki: The True Story (2014).  He ran the Newcastle University Theatre Society and assistant-directed a number of productions for Dorset Opera.  This is his first production for the professional stage.