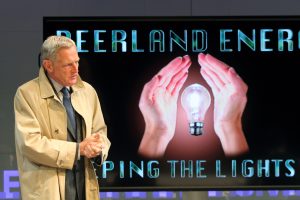 While we can lay claim to a lot of things here at Sitting In The Cheap Seats we’ve not, as yet, mastered the act of being in two places at once. As such it was a case of divide and conquer on Friday night as Matt headed to London to see The Fix (review here) while Emma van Kooperen braved the massed Pokemon trainers of Chichester to head to the Minerva Theatre, Here’s her report…
Fracking is something of a contentious subject in West Sussex, so where better to stage Alistair Beaton’s new comedy Fracked! (or: Please don’t use the word). Littered with references to very recent events (including Boris Johnson and Southern trains) you can’t help but feel the playwright is hidden in the theatre somewhere. 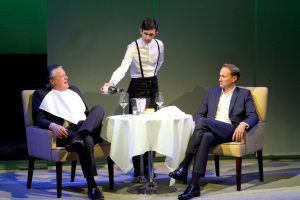 Anne Reid is outstanding as Elizabeth, the educated, middle class objector to fictional energy firm Deerland’s plan to frack in her village, moving from a concerned, Times-letter writing NIMBY (Not In My Back Yard) to a direct action advocate, disillusioned with politics and democracy. James Bolam puts his comedy background to good use as Elizabeth’s irritated but loyal husband Jack.
Fracked! does at times feel as much of an indictment against the world of PR as it is a satire on Fracking. Oliver Chris shines as Joe, a Malcolm Tucker-esque PR Consultant, completely lacking in morals or any humility, the type of character you love to hate but can’t stop watching. As Hal, the Head of Deerland Energy, Michael Simkins comes across as a little too naïve but gives a well-rounded performance. As the IT guy with a conscious Sam Otto provides a perfect counterbalance in the PR boardroom
Special mention must also go to Steven Roberts as the waiter providing excellent soufflé updates and ice cream choices.
Starting with a very realistic Parish Council meeting, the piece was slowed down on occasion by James Cotterill‘s revolving set. Switching between the rustic village home of Elizabeth and Joe’s modern PR offices took too long and the soundbites added to cover the changes added nothing to the show.
On occasion, Richard Wilson’s direction strays too far into sitcom territory but I can’t help but feel this would be just a suited to a one-off TV comedy as on the stage.