The Fix @ The Union Theatre 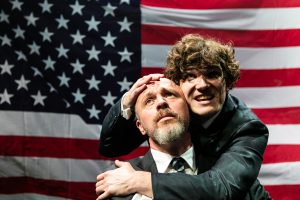 There are times when theatre can seem almost too prescient, where a show can offer a glimpse into a possible future that seems a little too real. There are moments in Michael Strassen’s production of The Fix that make you wonder just how much we are manipulated by the public view of politicians, and just how much they are all hiding.
I’ll confess I’ve wanted to see this show for a long time – a chance hearing of the 1997 Donmar production some years ago hooked me and it’s been rumbling around the back of my head as a must see ever since.
The opportunity to not only check out this show, but the first production in the all new Union Theatre was too good an opportunity to miss! The intimate staging perfectly suiting Dana P. Rowe’s eclectic score and allowing the viewer to soak up most of John Dempsey’s very sharp book and lyrics. 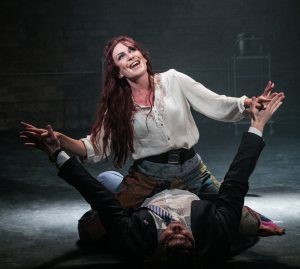 Unfortunately, the downside of intimate productions with a rock score is that at times, albeit only for short moments, dialogue and lyrics can be lost in the music – though it really is lovely music to get lost in. This is most evidenced by Fra Fee as Cal. He sings beautifully, but so lightly that at times – such as in the glorious One, Two Three it’s difficult to follow, though his Don’t Blame The Prince is crystal clear and captivates the audience effortlessly. He acts well too as the anointed heir of a political empire he’s never asked to be part of. His interaction with his uncle, speechwriter and campaign manager Grahame is electric. Ken Christiansen plays the latter with a mix of steely determination and, hidden deep down, genuine fear for what the future holds. His rendition of First Came Mercy shows the twisted view he has of a world he believes despises him. Powerful stuff. 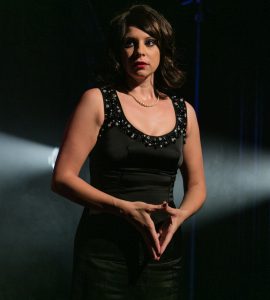 Not quite as powerful as Lucy Williamson’s tour-de-force performance as Violet though. Dashed of her aspirations when her presidential nominee husband has a heart attack between the thighs of a lover she decides to elevate her underachieving, unappreciative son instead. It’s a wonderful characterisation, somewhere between Machiavelli and Mama Rose and one of the best I’ve seen in a long time.
Madalena Alberto makes the most of her torch song Alleluia and cuts a sympathetic figure as the stripper with a good heart who ground Cal from the high flying aspirations others have for him. Her voice suits the smoky balladry and her slightly new age take on the character is an interesting one. Peter Saul Blewden catches the eye too as Cal’s father. It’s a strutting, peacock-like performance with just the right amount of arrogance to make a wholly believable presidential candidate!
The whole comes together as a fast-paced political whirlwind under Strassen’s watchful eye, with the ensemble every bit as important as those I’ve named above. The watchful, prowling presence of the mob is ever present – they’ve lifted this boy up and they’re desperate to watch him fall.
If you can, you really should make it your mission to see this – whether to enjoy a rare musical treat or to provoke your own thoughts and feelings on the political machinations we’re subjected to on a daily basis!