Curtain Up – What’s new in the world of theatre?

When mass media batters you relentlessly with depressing news it’s important to have some counter-points to cheer yourself up. For some it might be sport or showbiz gossip – for us, unsurprisingly, new theatre news never fails to excite. Here’s some of our favourite info from the past week!

Mark Rylance is a firm favourite of the site and confirmation that Nice Fish, the play co-written with Louis Jenkins and directed by Rylance’s partner and long-time collaborator Claire van Kampen, would be coming to the Harold Pinter Theatre for a limited season is good news indeed. A wry look at life in the American Midwest, Nice Fish stars Rylance and Jim Lichtscheidl as old friends whose everyday life is exposed on an ice-fishing trip. If you head to the theatre dressed as a fisherman or catch you might even net free tickets!
Nice Fish opens on November 15th for a strictly limited season. Further details and tickets can be found at www.nicefishtheplay.co.uk 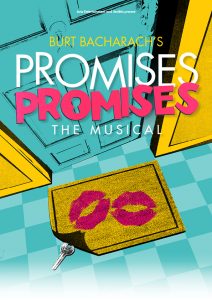 Booking is now open and the creative team has been announced for the first major London production of the hit Burt Bacharach/Hal David/Neil Simon Broadway musical Promises, Promises since its 1969 West End premiere.
Burt Bacharach’s incredible music and Hal David’s brilliant lyrics come together with a book by legendary playwright Neil Simon in Promises, Promises – the hit Broadway musical based on the Billy Wilder film The Apartment.

Chuck Baxter is junior executive at a New York insurance company, where his mid-town residence makes him popular with the executives bosses – who promise him promotion in order to “entertain” at his apartment. A morally tricky dilemma gets worse for Chuck when he realises his own secret crush, Fran Kubelik, has been invited over to his place for a rendezvous by Chuck’s Manager, JD Sheldrake.

A triumph of 1960s sexual work-place politics, with a quick witted script and unforgettable songs including Knowing When To Leave, Promises, Promises, Say A Little Prayer For You, A House Is Not A Home and I’ll Never Fall in Love Again, this Tony Award nominated, Grammy Award winning musical comes to Southwark Playhouse in its first London production for nearly 50 years from Friday 13 January to Saturday 18 February.
Bronagh Lagan directs, with musical direction from Elliot Davis and Cressida Carré providing choreography. Promises, Promises is produced by Aria Entertainment, further information and tickets at www.southwarkplayhouse.co.uk.

Following the critically acclaimed, sold out productions of The Dazzle and Bug at Found111, Emily Dobbs Productions is thrilled to present the London premiere of Unfaithful, a blackly comic new play starring Sean Campion (The Borgias, Stones in his Pockets), Niamh Cusack (Heartbeat, The Curious Incident of the Dog in the Night-time), Ruta Gedmintas (The Strain, The Tudors) and Matthew Lewis (Harry Potter film series, The Syndicate).

Tom is enjoying a quiet pint after work. Tara lies awake whilst her boyfriend finishes his shift. When their paths cross, a chain of events is sparked that reveal the unspoken desires and regrets of two relationships on the brink.

Sharply written by award-winning playwright Owen McCafferty (Scenes From The Big Picture, Shoot The Crow) Unfaithful questions what it means to be lovers, partners and people. Directed by Adam Penford (Watership Down, A Small Family Business).
Unfaithful will open for a 6-week season at the pop-up venue, the original site of the Central St Martins School of Art, at 111 Charing Cross Road, on Thursday 25 August. Tickets and further info at www.found111.co.uk

Over the river at the Old Vic  the world premiere of No’s Knife, a fascinating journey into the world of Samuel Beckett will take place in September. The piece, conceived and performed by Lisa Dwan and co-directed by Joe Murphy offers a searing, personal reflection on Texts for Nothing, Beckett’s most startlingly original work. Find out more at www.oldvictheatre.com. 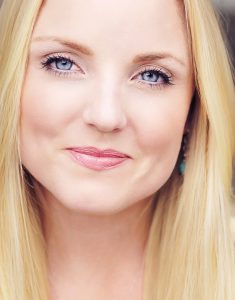 Several major Musical Theatre stars are to headline a concert production of Godspell, the heart-lifting feel-good Broadway musical from Stephen Schwartz (Wicked), at St. Paul’s Church in Covent Garden on Tuesday 30 and Wednesday 31 August.
Leading a cast of talented new young performers to launch of The British Theatre Academy will be Broadway and West End Wicked Star Kerry Ellis, Olivier Nominated Preeya Kalidas (Bend It Like Beckham) and Tony-nominated Ramin Karimloo (Jean Valjean in Les Mirerables and the Phantom in The Phantom of the Opera).
A timeless tale of friendship, loyalty and love, Godspell, will be directed by Dean Johnson with musical direction by Michael Bradley (Grey Gardens). The evening will be hosted by Mark Shenton, associate editor and joint lead critic of The Stage.
The British Theatre Academy has been set up to give young people who cannot afford to  access theatre training the opportunity to work with top creatives in venues around the country.
British Theatre Academy Artistic Director Matthew Chandler said: “I am delighted that Kerry, Ramin and Preeya are giving our kids the opportunity to work with such amazing, inspiring, world class talents. Godspell promises to be an unforgettable expeience for them all.”
Tickets from £17:50 can be booked at: www.ticketsource.co.uk/thebritishtheatreacademy.
Proceeds will go to continuing the great work of THE BTA giving young people the chance to perform for free.
Kerry Ellis said: “It’s so great to have the opportunity to work with new talent who have passion for the arts, that’s exactly what the kids from the British Theatre Academy are all about’.”
Preeya added: “I’m so excited to be able to go back to where to all began for me”. 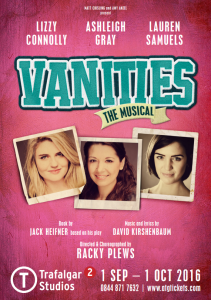 This Autumn, Lauren Samuels (Bend it Like Beckham, BBC’s Over the Rainbow, Grease), Ashleigh Gray (Wicked, Cool Rider) and Lizzy Connolly (Dirty Rotten Scoundrels, Xanadu) star in the European debut of Vanities, a classic American story. This brand new production features never before seen material with all new direction and choreography from Racky Plews (Footloose, American Idiot).
Following acclaimed runs in Seattle, Houston, New York, and Los Angeles, Vanities makes its London debut for the 10th anniversary of the musical (book by Jack Heifner and music and lyrics by David Kirshenbaum) and 40th anniversary of the play.
Vanities is a hilarious and heartfelt story about three best friends growing up in Dallas at a time when image and style were more important than brains and ambition. Through a rich original score that blends girl group harmonies of the 60s and 70s with contemporary musical theatre, Vanities explores how these women’s warped view of the world shaped them for better and worse.
Running Through September at Trafalgar Studios 2, more info at http://www.atgtickets.com/shows/vanities-the-musical/trafalgar-studios

Stephanie Beacham will be donning a tiara to play Princess Margaret in A Princess Undone, a new play by Richard Stirling.
Kensington Palace, 1993. She was the Diana of her day. That day has gone. But HRH The Princess Margaret, the most glamorous figure of her generation, has a final chance to be of service. While the Royal Family is at Balmoral, she removes several bags of correspondence from the Queen Mother’s home, including potentially sensational letters from Prince Charles – and Diana, Princess of Wales. She means to burn them all. But there are other papers. Some of them relate to Margaret herself, and a scandal as dangerous as anything since. When an ex-gangster arrives to bring her even closer to her past, the Queen’s sister has the choice to make or break her family yet again.
Inspired by actual events, A Princess Undone, which has its world premiere at Cambridge Arts Theatre, Wednesday 19 – Saturday 22 October, sheds light on one of the Royal Family’s most controversial, enigmatic members.
Witty, charming and provocative, yet ultimately on her own, Princess Margaret is not easily forgotten.
Stephanie Beacham, world-famous and acclaimed for her work on television (The Colbys, Dynasty, Bad Girls), film and stage, returns to the theatre to create a role as iconic as any she has played before.
With a star cast including Jason Merrells (Emmerdale, Waterloo Road, currently starring in Alan Aykbourn’s How the Other Half Loves in the West End) as ex-gangster John Bindon, and an award-winning creative team headed by Director Matthew Gould, this riveting new play promises to be one of the most talked-about of the year!
Further dates include: Tuesday 1 – Saturday 5 November, Devonshire Park Theatre, Eastbourne; Monday 7 – Saturday 12 November, Yvonne Arnaud Theatre, Guildford.

All this and Titanic announced a one week extension – so if you haven’t managed to see it yet you’ve now got an extra week of performances to get along to and it really shouldn’t be missed! Check out the picture below for the show’s entry into this year’s West End Bakeoff! 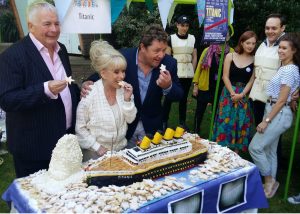