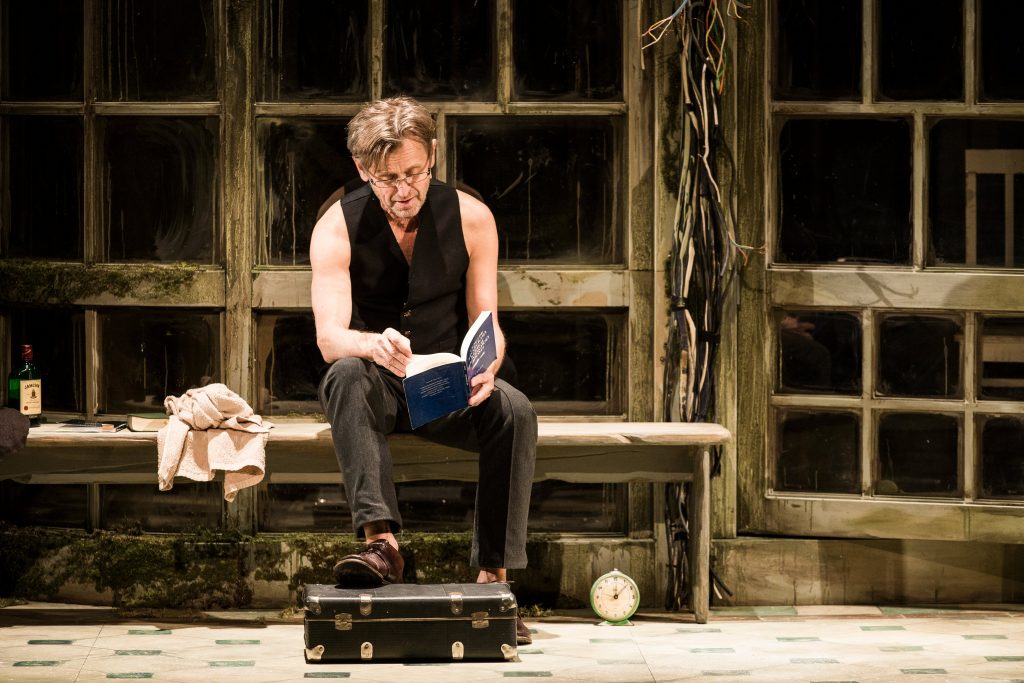 Brodsky/Baryshnikov is a one-man show, performed by legendary dancer Mikhail Baryshnikov, based on the poems of Nobel laureate Joseph Brodsky.  The production is an emotional journey deep into the poet’s visceral and complex compositions.  For the UK premiere, the show comes to the West End’s Apollo Theatre for a limited run of four nights only.
Brodsky/Baryshnikov is conceived and directed by Alvis Hermanis, noted Latvian director of The New Riga Theatre.  Performed in Russian with English surtitles, Baryshnikov recites a selection of his long-time friend’s poignant and eloquent works.  His subtle physicality transports the audience into Hermanis’ reverent imagining of Brodsky’s interior world.
Baryshnikov first remembers reading Brodksy’s poetry when he was aged 16, having just arrived in Leningrad to study ballet.  Brodsky and Baryshnikov were introduced at a party in New York, soon after Brodsky’s forcible exile from the Soviet Union in 1972.  This marked the start of their 22 year friendship which lasted until Brodsky’s death in 1996.
The two men spoke nearly every day and even opened a restaurant together.  Found somewhere between a play, a poetry recital and a piece of performance art, Brodsky/Baryshnikov is Baryshnikov’s nostalgic tribute to his once dear friend.
But the main drama is in the use of the language. Sometimes Baryshnikov reads the poems from one of the books; sometimes he whispers the words, sometimes he yells them, sometimes he just opens his mouth and lets them fall out. Usually he speaks them from memory. Unnervingly, sometimes Brodsky reads the poems, over the sound system. (At those times, an old reel-to-reel tape recorder turns on one of the benches.) But then sometimes Baryshnikov too reads the poems on tape, and you’re not always sure which of them is speaking…. (New York Review of Books).
Brodsky/Baryshnikov in London is made possible thanks to the generous support of Norvik Banka and Blavatnik Family Foundation.  It is a co-production between The New Riga Theatre and Baryshnikov Productions.