The Alchemist @ The Barbican Centre 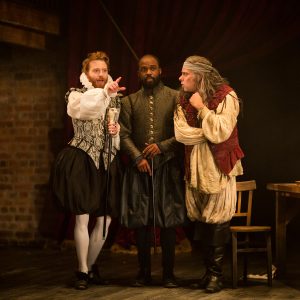 After two nights of pretty intense action from the Royal Shakespeare Company I was glad to be seeing something a little lighter on my return visit to the Barbican Centre (we were in Stratford-Upon-Avon on Monday to see their new production of King Lear before heading to London and you can read our review of Tuesday night’s Doctor Faustus here).
I’ll readily admit that I’m not really too familiar with Ben Jonson’s work, but The Alchemist, presented here with some script revision from Stephen Jeffreys is a riotous romp through Jacobean London! 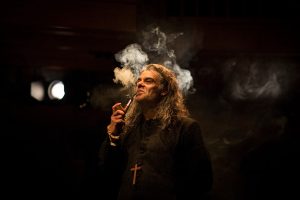 We arrive in Blackfriars to find residents have fled the plague ad the master of the house has left his butler Jeremy in charge. Jeremy – better known as the conman Face is working a huge con with confederates Subtle and Dol Common, the trio separating the locals from their money in exchange for various magical aides including the philosopher’s stone.
Ken Nwosu plays Face as a relentlessly charming, lightning quick-witted combination of Blackadder and Keyser Söze. His asides to audience are great and his leaps between personas glorious. Nwosu, much like Paapa Essiedu over in Stratford, brings a real freshness to his delivery that hints at a changing approach for the RSC – one that may prove very exciting!
Subtle – assuming the role of “The Doctor” a wise man, alchemist and tutor – is a wonderful comic character sublimely presented by RSC veteran Mark Lockyer. One moment he broods, the next he explodes in verbose exclamations.
There’s a wide variety of delightful supporting characters too, Tom McCall’s would be gallant and Richard Leeming’s simpering tobacconist notable among them.
The Alchemist may lack the deep thinking of Faustus or Lear, but it makes up for it with bravura bawdiness and a pair of pitch perfect central performances!