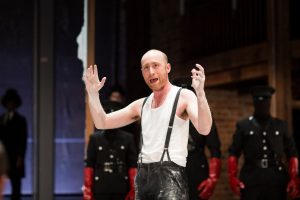 It’s a rare feeling to sit in the audience for a play and feel you truly don’t know what to expect – in the age of social media it’s impossible not to have a good idea what to expect, but when two men walk onto the stage at the beginning of Faustus, stare each other in the eye and light a match cast, crew and audience will all find out together who will take the titular role.
On press night Sandy Grierson’s flame sputtered out first and he remained on stage, launching into Faustus’ opening monologue and introducing us to the jaded, scholar in his endless pursuit of knowledge. Grierson’s Scots brogue lends the titular Doctor a canny, cynical air and aids in showing his constant straining against the fate he has cast on himself. 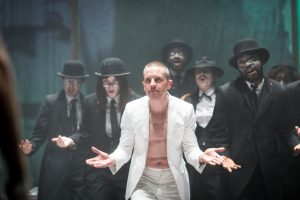 As Oliver Ryan’s match burned on he gets to leave the stage, but returns when summoned, clad in a white suit, shirtless and with feet blackened by ash. Small, but wirily muscular his Mephistopheles burns with repressed energy and Ryan has a knack for stillness that lends a sinister air to every moment he lurks on the stage. He’s capable of delivering a line beautifully too. When, in an interesting twist he delivers the famous “Is this the face that launched a thousand ships…” monologue while Faustus tries, and seemingly fails, to seduce a childlike Helen of Troy.
While the set here is relatively simple – a mostly bare stage with some boxes, papers and books scattered about – Maria Aberg makes some bold directorial decisions, notably when Faustus submits to summoning the demon by tearing his shirt off and using it to paint a pentagram onto the stage before setting boxes of papers on fire to mark the points of the star. As Faustus makes the most of his new-found power we’re treated to a surreal parade of faceless moments – including a parade of the seven deadly sins straight out of a Tim Burton movie!
Clocking in at less than two hours, and without an interval, this is a hasty run through Marlowe’s story, but for all that it’s a delight to see a production trimmed of fat the story flies by so quickly that there’s no sense of time passing. Grierson and Ryan both shine, while the rest of the cast barely have time to make any of their myriad characters land with the audience. In the end, this is an intriguing, but strangely unfulfilling production. Nonetheless, for the two central performers alone, this is well worth seeing!