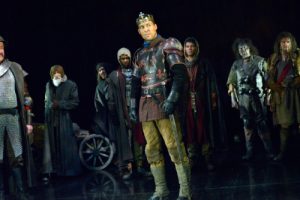 Shakespeare has loomed large over London’s theatre scene in 2015, from the fevered anticipation to Benedict Cumberbatch’s performances in (the underwhelming) Hamlet to Kenneth Branagh forming his own company and presenting a series of plays built around a pair of the Bard’s pieces. With such fanfare the RSC’s return to the Barbican with the last of their King and Country cycle (and later the whole cycle in repertory) has almost slipped in under the radar, but the less heralded shows are, in our experience, often the most rewarding…
We open on an almost bare stage, the well-used throne that has formed a centrepiece for this cycle of plays has a crown perched nonchalantly on it. As the lights dim Oliver Ford Davies’ Chorus ambles onto the stage, with his cardigan and scarf he’s reminiscent of the moon man from the new John Lewis advert. He potters about until the shiny diadem catches his eye and reaches out for it, before it is snatched away by Alex Hassell’s King. Then we get thatprologue, spoken by a true master of Shakespearean verse it is a dream opening that promises much enjoyment to come.
Despite running in at three hours and with very few (if any) cuts, this production whips along at pace, Gregory Doran wisely allowing his cast, most of whom have bonded through their time in Henry IV last year, just enough space to let their dialogue hit home. The centrepiece is, of course, Hassell’s Henry V. In this incarnation he’s as close to Hal as we’re likely to see and seems to be still coming to terms with his role as monarch. His fervent reply to the Dauphin’s gift of tennis balls is the first time we see his regal demeanour slip and a glimpse of the lad who spent his time in Eastcheap taverns slips through. A few people around me criticised Hassell’s tendency to slip into a high, strained, voice when he delivers his more fervent lines but for me this added an element of reality and spontaneity to his portrayal. The two big speeches seeming more off the cuff than rehearsed propaganda and more potent (in this production at least) for it. 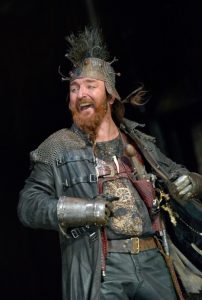 For all that Hassell dominates there are a number of superb characterisations here, Sean Chapman’s militaristic Exeter, complete with marching stick, seems a formidable ally to the king, while the erratic Pistol (the madcap Antony Byrne reprising his role from Henry IV p2) may just undermine all the king’s plan.  The Dauphin is portrayed here as a preening, spoiled, man-child – a reflection of everything Hal may have become but chose to move away from – a wonderful move by Robert Gilbert and Greg Doran. As his sister Katherine Jennifer Kirby is a firecracker and the scene where her maid (Leigh Quinn, making the most of her stage time as always) attempts to teach her English raises some of the biggest laughs of the night.
The biggest delight though is Joshua Richards’ Fluellen, the Welsh officer seemingly obsessed with the etiquette of war. He delivers lines at a machine gun pace and whether opposite Hassell, Byrne or Simon Yadoo’s intentionally incomprehensible Scottish officer he’s a delightful masterclass in character acting.
This then, is a fitting end to the cycle of Kings, but it is of course still early days in Doran’s plan to stage all of Shakespeare’s plays (he has 6 years left in which to complete the set). Alex Hassell is being rightly regarded as a star in the making, though to our eyes he fulfilled that potential as Hal last year and cemented it in the excellent Death of a Salesman. The real question is where he and the rest of this fine company will find themselves next…