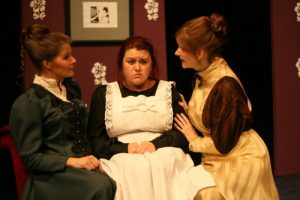 A play by David Mamet that pays tribute to Oscar Wilde… sounds like an odd concept, but Boston Marriage manages to blend the best of both writers, Mamet’s snappy dialogue married to Wilde’s verbose grandeur!
Bench Theatre have a reputation for always looking for pieces that provide strong female roles and this three-hander fits the bill perfectly. Of course with only three characters there’s little breathing room for any of the performers here and the first act sees them struggle a little with the beat of Mamet’s discourse (the playwright famously brings a metronome into rehearsal rooms to aid actors). It’s a flow that is distinctly American and can be tricky for us Brits to fully embrace, but in the second act there are no such jitters and the whole flows wonderfully.
The plot is, in the Wilde tradition, very simple at heart but with a course of diverting and bizarre little twists. Anna and Claire are two New-Englanders used to a certain standard of living. The former has a wealthy protector while the latter professes to have fallen in love. Both relationships show that the veneer of good living is just that and the two ladies, reliant on each other for friendship and financial security, watch their world fall apart as Claire announces that the young lady she loves is coming to the house for a rendezvous. Anna’s disgust soon turns to jealousy and she becomes involved in proceedings while finding time to constantly harangue her put-upon maid.
Robin Hall makes for a strong Anna, playing up to the affected disinterest of the character whilst revelling in the increasingly profane and venomous interchanges with friend and servant. She’s equalled by Julie Wood’s effervescent Claire who forever tries to turn Anna’s rage to a happier mood. Both actresses put their characters across well, but Jessi Wilson’s delightful Scottish maid is a complete scene stealer and had this curmudgeonly writer emitting booming belly laughs.
Director Mark Wakeman uses the relatively confining Spring space well and wisely lets the ladies find their characters and progress the story through them.
This may not be among Mamet’s most celebrated work, but on this evidence it certainly deserves more attention!