An Inspector Calls @ The Mayflower, Southampton 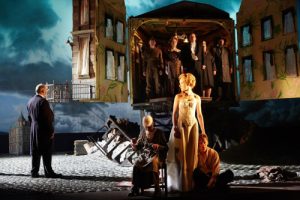 We’ve always been intrigued by Stephen Daldry’s highly revered production of this classic play but it has somehow consistently eluded us. Determined to cover it when the next chance came we dispatched Emma van Kooperen to report in for us!
It’s been almost a quarter of a century (well, 23 and a half years) since Stephen Daldry’s revival of An Inspector Calls first opened in London and it was 18 years ago that I first saw it. I remember reading it in GCSE English and then (reluctantly) signing up for the school trip. I couldn’t relate to the play, it meant nothing to me.
Until the curtain went up anyway! I remember, for the first time really understanding what the play was about and more importantly, why is it relevant. 18 years later, would it still have the same impact? Would I still find it relevant? The answer was a resounding YES!
Ian McNeill’s design, with the undersize mansion upon a pedestal rising above a dull and dirty street, still manages to wow. The Birlings concealed inside, with the audience only able to glance through windows and listen to somewhat muted conversations. That is until the arrival of Inspector Goole, investigating the suicide of a young girl, when the walls of the mansion are flung open for all to see their transgressions and who they truly are.
Geoff Leesley and Caroline Wildi, as Arthur and Sybil Birling, are suitably conceited and self-righteous. Matthew Douglas’s Gerald Croft is equally smug but appears, at first, to show genuine remorse for the young girl treated so badly, that is until the Inspector leaves. Once the Interrogation is over, they slip all too quickly back into their true selves, oblivious to the need for change around them.
As the younger Birlings, Katherine Jack (Sheila) and Hamish Riddle (Eric) at first show the carefree attitude to the working class as their parents, but the longer the Inspector is with them, the more their attitude is irrevocably changed. Hamish Riddle manages to embody the young, society man-about-town without pushing him into caricature. Katherine Jack gives a standout performance as Sheila, deftly moving from a cheery young woman, happy to spend her days shopping to a woman troubled by the class system around her and how the actions of the upper classes, no matter how trivial at the time, can have a lasting effect.
Liam Brennan makes for a good Inspector Goole but at times feels a little too involved with the story of Eva Smith to be believable as an Inspector. However his delivery of Gooles last speech, warning of the oncoming “fire and blood and anguish” gave me goosebumps!