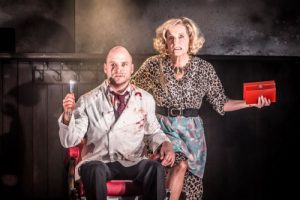 When a production of Stephen Sondheim’s epic, powerful masterpieceSweeney Todd rolls into town it can’t be missed! So, even though I was laid up and unable to attend Emma van Kooperen made sure we could tell you all about Welsh National Opera’s demon barber…

With Sweeney Todd being my favourite musicals I had been looking forward to the Welsh National Opera’s staging for quite some time. There is something about the tragedy coupled with Sondheim’s rich and complex score, which lends itself to opera and I couldn’t wait to hear it. Sadly I was a little disappointed. Set in an asylum with the chorus setting the scene right from the off James Brining’s take on Sweeney was in parts, plodding and at others, dull. It easily could have been 30 minutes shorter.

David Arnsperger did not command the stage as Sweeney should, often overshadowed by those around him. There were times I did find him captivating, Sweeney’s beautifully understated duet with Judge Turpin (Steven Page) was the pinnacle of his performance, but these were, sadly, very few and far between.

As Mrs Lovett, Janis Kelly verged on caricature but managed to stay the right side of parody. Even during the somewhat flat ‘God, that’s Good’ Kelly’s comedic timing managed to keep all eyes on her brash and brassy Mrs Lovett.

As Anthony and Johanna, Jamie Muscato and Soraya Mafi, are enjoyable to watch with Paul Charles Clarke’s Pirelli providing somewhat needed comic relief early on (and a Delboy style Robin Reliant was a good touch).

Brilliantly conducted by James Holmes, the orchestra of the WNO excelled. But the real stars of the piece was the WNO chorus who, not only sang incredibly together, but acted out their individual parts well. Special mention must go to the members of the chorus singing ‘The Letter’.