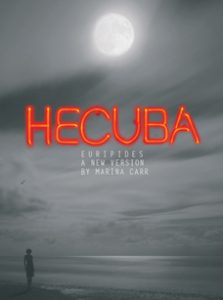 Full casting is announced for the Swan Theatre production of Marina Carr’s new play based on the epic tale of Hecuba, directed by RSC Deputy Artistic Director Erica Whyman with Derbhle Crotty in the title role, opening on Thursday 24 September 2015.
Derbhle Crotty returns to the RSC to play Hecuba, having previously played Lady Macbeth and Lady Duncan in the 2007 repertory season ofMacbeth and Ionesco’s Macbett. Derbhle is currently playing Bolingbroke/Henry IV in DruidShakespeare, which has played various venues in Ireland, New York and at the Kilkenny Festival. She is known for her film roles in Notes on a Scandal (2006), Rory O’Shea Was Here (2004) andNoble (2014).
Also returning is RSC Associate Artist Ray Fearon as Agamemnon, who has worked extensively with the RSC, most recently as Mark Antony inJulius Caesar and as the title role in Othello (1999). His recent theatre credits include playing Macduff in Macbeth at the Manchester International Festival; Ray also appeared in the 2006 series of Strictly Come Dancing. Joining him is Edmund Kingsley who plays Polymestor. Edmund can currently be seen in the BBC 2 mini-series Life in Squares as John Maynard Keynes. His RSC credits include Antony and Cleopatra, Julius Caesar and The Tempest, as part of the Complete Works Festival, Richard III, King John and Lord of the Flies. His film credits include Hugo (2011) and Stonehearst Asylum (2014).
The full cast includes: Nadia Albina (Cassandra); David Ajao (Nepotolemus); Derbhle Crotty (Hecuba); Ray Fearon (Agamemnon); Edmund Kingsley (Polymestor); Amy McAllister (Polyxena); Chu Omambala (Odysseus) and Lara Stubbs (Hecuba’s Woman).
Hecuba is designed by Soutra Gilmour with lighting by Charles Balfour. The music is composed by Isobel Waller-Bridge with sound byAndrew Franks. Movement is by Ayse Tashkiran.