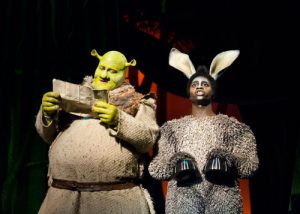 Take a blockbuster movie, add a bunch of songs and some sparkly costumes and stick it on a stage… A tried and tested recipe for success and one that seems to be a guarantee of success. It certainly didn’t hurt Shrek when that landed in the West End and tickets flew out of the box office. Now the show is heading out on tour around the UK and we made our way to the Mayflower to check it out.
I’ll admit I was a little dubious about how well Shrek would translate to the stage, but overall the production works well. Taking a leaf out of Disney’s book they’ve eschewed directly copying the animated characters’ looks and gone for slightly stylised costumes that suit the panto style sets.
The performances are largely strong too. Dean Chisnall makes Shrek his own and gives a more complex interpretation than has been seen on screen, making the ogre less fearsome, but more sympathetic. Bronté Barbé is similarly a charismatic Fiona with a gorgeous singing voice. Sadly Idriss Kargbo’s Donkey is more drag queen in a fur coat than the annoying but adorable sidekick of the films, though I fear that is more a fault of the script than the actor. 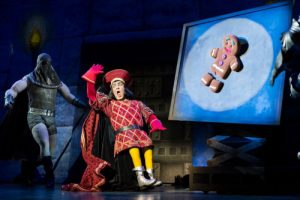 The star of the show is pint-sized baddie Lord Farquaad, a dinky despot in dire need of a bride. Gerard Carey is absolutely perfect in the role, playing on every double-entendre, knowing or otherwise, and teasing the audience with expressive looks that would make Kenneth Williams proud!
The ensemble are very good too, but the whole cast is let down by a frankly turgid score that is utterly devoid of a memorable melody. I’m sat here a scant few hours after the curtain dropped and couldn’t hum any of it that wasn’t an (intentional) imitation of another musical.
It’s a canny move to add those little nods though, and the likes of Gypsy, Les Miserables and The Lion King all get hinted at here… though each hint reminds of just how bland these songs are by comparison.
That’s not to say you can’t have a great time here, the cast are wonderful and there are numerous laugh out loud moments. Even when the show was stopped for ten minutes due to the illness of one of the child performers and there was a subsequent drop in pace, there were still chuckles a-plenty. Lose those lacklustre songs and the whole things would whip along at great pace and be all the better for it!