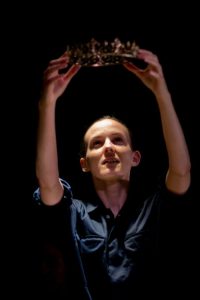 It has become painfully clear to me in recent years that while I’ve visited the majority of West End theatres, I’ve only really scratched at the surface of London’s ever-vibrant theatrical scene. One venue is repeatedly at the top of peoples lists for atmosphere… indeed when I posted on Facebook that I’d never been Mark Shenton was aghast as he has long championed Union Theatre!
Well, I can finally tick it off the list and if I waited longer then I should I can reassure myself that I made a fantastic choice in my first show there! I’ve followed Lazarus Theatre’s exploits for a while, their fresh spins on the classics are repeatedly given glowing reviews so I couldn’t turn down the chance to see their take on Henry V!
Director Ricky Dukes has assembled an all-female cast of 10 who mostly jump between roles in this condensed interpretation of Shakespeare’s examination of life in a war. Dukes strips away the scenes in the French court and does without the side-plot of Bardolph and Nim, losing a little of the light relief but allowing the story to whip along at pace. Those unfamiliar with the play may find a couple of scenes difficult to follow, but largely the plot is unaffected by the cuts. 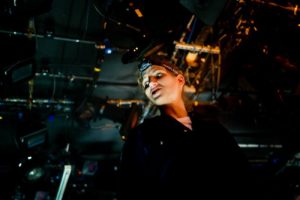 The set is simple, a long white table, a number of candles and a crown bathed in a spotlight. The cast enter singing a Te Deum and launch into the prologue, the role of chorus is shared throughout the cast to great effect.
The smoke and backlighting, coupled with the blue jumpsuits the performers wear lends an eerie, timeless feel to proceedings. It’s immediately clear too that the all-female casting is not an examination of these characters as women, but is more gender-blind…. Dukes just wants to give great female talent a chance to perform some great roles! He has some wonderful ideas too, the tennis balls in party bags and the clown-faced French envoy are lovely touches.
In the central role Colette O’Rourke shines. She prowls the stage like a stalking tiger and though she be but little, she is indeed fierce! The “Once more unto the breach…” monologue, delivered as an impassioned plea to higher powers and the stunning St Crispins Day speech are intensely moving! Trains hurtle overhead throughout the show, their muted thuds seeming to be Harry’s heartb eat as he coolly leads his countrymen to victory at Agincourt.
The rest of the cast all have their moments to shine and each takes their roles well. Special mention though to RJ Seeley whose Fluellen is a delight. She really embraces the ebb and flow of Shakespearean dialogue and even amongst such a solid cast, she dazzles!
If you’ve not seen Lazarus before you may have missed your chance for this production, as Henry V closes on Saturday, but head tohttp://www.lazarustheatrecompany.com/ as they’ll be back soon with Tamburlaine The Great and if this production is anything to go by you won’t want to miss it!