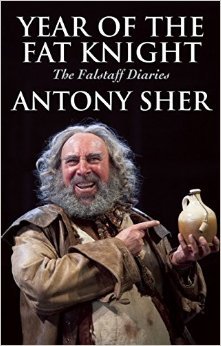 It’s strangely comforting to realise that even the greatest actors have their fair share of fears and worries over their performances. Though most performers work hard to hide them, in his latest book Year of The Fat Knight Antony Sher (a Sir himself) confronts those feelings head on in a brilliantly honest and wonderfully engrossing diary that encompasses the days between the Gregory Doran deciding to direct the Henry plays and opening night at the Royal Shakespeare Theatre.
Sher is a fascinating writer, brutally honest about his feelings and his past transgressions. He also has the knack of writing in a voice that is unmistakeably his. As he divulges the conversations his partner Gregory Doran has with a number of leading Shakespearian actors over whether they would be interested in playing Falstaff you understand he genuinely had no idea he would end up playing the role himself!
More than anything though this book, like his excellent Year of The King is a captivating instruction in what it is to be a character actor and how much work goes into not only learning the lines (though Sher’s technique for doing so is interesting in and of itself) but into discovering the character.
Though Sher travels from London to Stratford, via New York, New Zealand and Africa, he maintains a very down-to-earth attitude about his work.
If you’ve ever been fascinated with just how a production comes together or how a consummate character actor approaches their craft, or even if you just enjoyed the recent Royal Shakespeare Company production of Henry IV, then do yourself a favour and grab a copy of this instant classic!