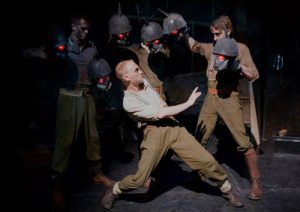 We’re very excited about a show coming soon to one of our favourite local venues, The New Theatre Royal, Portsmouth.

We heard some great things about The Trench when it was performed at the Edinburgh Fringe last year, everyone seemed to love it!

A multi-faceted production from Les Enfants Terribles, The Trench tells the true story of a miner entombed in a tunnel during the first World War. Mixing physical theatre, puppetry and live music from Alexander Wolfe (Emergenza Emerging Talent award winner), The Trench blurs the lines between reality and fantasy to bring this fantastically powerful and vivid story to life!

There’s an extra element of interest too. As the performance will take place after work begins on rebuilding the rear of the NTR, allowing audiences to take in the performance up close!

Since their formation in 2001 Les Enfants Terribles have toured across the globe and built a reputation as a boundary-breaking and daringly alternative theatre company. As a result their production of ‘West’ enjoyed a sell-out run in London and won the Herald Devil and the Times Critic’s Choice awards at The Edinburgh Fringe Festival.

Here’s some great things others have written about The Trench (that got us all excited in the first place:

“Les Enfants Terribles latest creation is exciting, slick an evocative…the real poetry of The Trench is in its puppetry, its movement and imagination” What’s On Stage