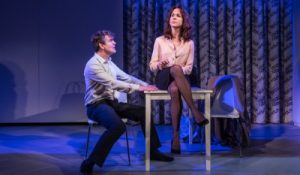 Florian Zeller’s name is fast becoming a byword for gripping, fascinating and often brilliantly funny theatre. Productions of The Mother and The Father have racked up critical raves and when The Truth opened at the Menier Chocolate Factory it was greeted with equal fervour.

It was no surprise then that this razor sharp four-hander found its way into the West End, and in my favourite theatre no less! Zeller’s play, adeptly translated by Christopher Hampton, zips along without a single wasted word and the quartet onstage have fine-tuned their performances to wring maximum emotion from every moment.
Lindsay Posner weaves the paths of his four performers expertly and leaves the audience genuinely unsure at times whether they are supposed to sympathise with the characters or hate them. Of course the ability to walk such a fine line requires high quality performances. Alexander Hanson’s Michel, neck deep into an affair with his best-friend’s wife is at once a complete bastard and incredibly endearing, it’s a superb performance with Hanson’s brash denials and pig-headed stubbornness all too familiar to the guffawing audience!
The laughs hide intense pain here though and as we laugh at the words being spoken there’s often despair writ large across the faces of the performers. It’s most noticeable at the close of the piece as Tanya Franks’ Laurence silently anguishes in an exquisite piece of acting! Frances O’Connor’s Alice, at once sexy and innocent in her need to get the truth out in the open balances with Franks’ stoic performance perfectly while Robert Portal’s Paul could have stepped out of a Pinter play with his direct and strangely emotionless reception to the emotional chaos around him.
It’s difficult to do this production justice in words, it really is a performance that needs to be seen and absorbed so do yourself a favour and go grab a ticket!