We’ve already declared our love for Guys and Dolls here on the site, so it’s fair to say that we were upbeat as we headed to Chichester Festival Theatre to check out their version of this undoubted classic. Then I got a little scared. I’ve seen so many good productions of late what if this was the one that broke the streak? What if this dampened my ardour for this classic piece of musical theatre? What if it just wasn’t very good? Thankfully, these doubts were pointless, Guys and Dolls is very, very, good indeed!

It all starts with a simple but beautiful set, the back wall a blur of advertising and classic New York imagery, the outline even bringing to mind the Manhattan skyline. Then we begin with the organised chaos of the Runyonland sequence and into a song that holds a special place in my heart (as I’ve been lucky enough to perform it twice), the glorious Fugue For Tinhorns. Performed with panache, it sets the tone for the whole show and you know in an instant that we’ll be walking just the right side of the line between character and caricature. 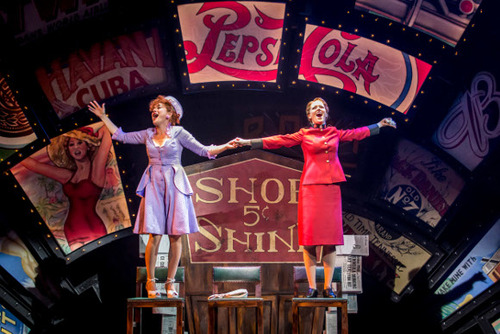 Gordon Greenberg keeps the show moving at a good lick and wisely trusts his four leads to make the most of every moment and what a quartet he has at his disposal! Long-time Chichester favourite Peter Polycarpou plays brow-beaten Nathan Detroit with a world weary resignation that is countered wonderfully by the vibrant presence of Sophie Thompson as Miss Adelaide, a character who is normally all giggles and squeaks is here rendered as a fully formed person. Yes she’s a little over the top, but in a manner believable of someone trapped between a life of stage shows in seedy clubs and a man who can’t let go of his own after dark activities. Equally Jamie Parker’s cocky grin is tailor made for Sky Masterson and he has a surprisingly lovely singing voice to boot. His relationship with uptight Sarah Brown starts subtly but builds to a beautiful climax. If Clare Foster comes across as the weakest of the four it’s no reflection of her talent, but rather proof that her character, despite having some lovely moments, has the least to grab on to among the leads.

Then there are the dancers… Some have criticised the fact that they aren’t sexy, as if that is somehow indicative of their ability. Those critics miss the point that the Hotbox numbers are supposed to look tacky and OTT, these girls are nightclub stands, not Broadway performers! Both male and female dancers embody the work of choreographers  Carlos Acosta and Andrew Wright wonderfully, making the moves work rather than worrying about looking good.

Before even taking my seat I thought Guys and Dolls was undoubtedly in the upper echelons of classic musical theatre. By the time I made my way home there was no doubting it!