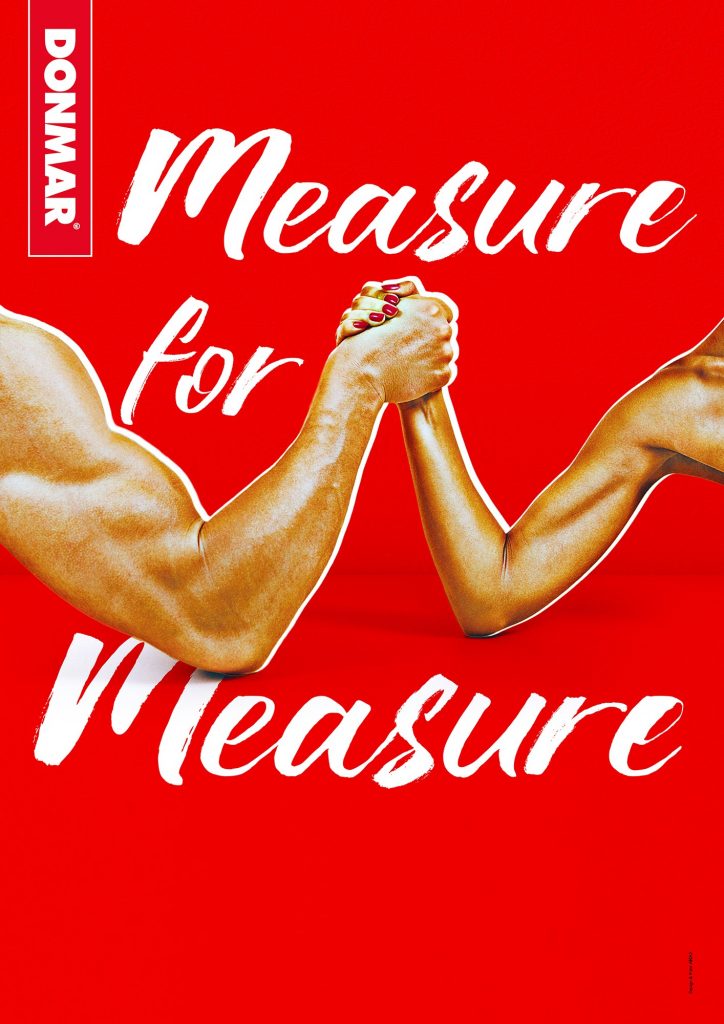 Josie Rourke’s production of Measure for Measure imagines the play in its original year of performance, 1604, and also in 2018. Within every performance, Hayley Atwell and Jack Lowden will alternate the roles of the powerful Deputy and the powerless Novice.

The tempter or the tempted, who sins most?

Vienna is corrupt. The Duke, who has let the city fall to vice, hands control to his Deputy, a hardline, puritan reformer.

The Deputy uses ancient laws to sentence citizens to death for sexual misconduct. But when a religious Novice pleads for clemency, their heady encounter leaves the Deputy guilty of the very crime that the law condemns.

Josie Rourke (Director) is the Artistic Director of the Donmar Warehouse where she has directed Saint Joan, starring Gemma Arterton and broadcast live in cinemas around the world in partnership with National Theatre Live; the world premiere of Nick Payne’s new play Elegy;  Les Liaisons Dangereuses, which was nominated for the Olivier Award for Best Revival, ran at the Booth Theatre, New York and was broadcast live in cinemas with National Theatre Live; The Vote, which was broadcast live on More 4 on the night of the 2015 UK election to an audience of half a million and nominated for a BAFTA; City of Angels, which received the Olivier Award for Best Musical Revival; Privacy, a new play created by James Graham and Josie Rourke, which also played at The Public Theater, New York, and starred Daniel Radcliffe;  Coriolanus, which was broadcast live in cinemas in partnership with National Theatre Live and for which Tom Hiddleston won the Evening Standard Award for Best Actor; The Weir, which transferred to Wyndham’s Theatre; The Machine at Manchester International Festival and at Park Avenue Armory, New York; Berenice; The Physicists; The Recruiting Officer; Frame 312; and World Music. Her additional theatre credits include Much Ado About Nothing at Wyndham’s Theatre, nominated for the Olivier Award for Best Revival; Men Should Weep at the National Theatre; Twelfth Night at Chicago Shakespeare; Crazyblackmuthafuckin’self and Loyal Women at the Royal Court; King John at the RSC; and The Long and the Short and the Tall and Kick for Touch at Sheffield Theatres. Rourke was previously Artistic Director of the Bush Theatre, which was named Theatre of the Year under her leadership. At the Bush Theatre, her credits include the premiere of If There Is I Haven’t Found it Yet by Nick Payne.  Josie’s first feature film Mary Queen of Scots, produced by Working Title a​nd Focus Features and starring Saoirse Ronan and Margot Robbie, will be released in cinemas later this year.

Hayley Atwell (Isabella) makes her Donmar Warehouse debut in Measure for Measure. Her theatre credits include Dry Powder (Hampstead Theatre), The Faith Machine (Royal Court Theatre), The Man of Mode, Major Barbara (National Theatre), Women Beware Women (RSC) and Prometheus Bound (West End). She has been nominated for two Olivier awards for her performances in A View from the Bridge (Duke of York’s) and in The Pride (Trafalgar Studios). Her television credits include Howard’s End, Pillars of the Earth, for which she received a Golden Globe nomination, Black Mirror, Life of Crime, for which she was nominated for a TV Choice Award, Any Human Heart, Restless, The Line of Beauty and the Agent Carter series. Her film credits include Christopher Robin, Cinderella, All is By My Side, The Duchess, Brideshead Revisited, Cassandra’s Dream and Agent Peggy Carter in the Marvel movie franchise.

Matt Bardock (Lucio) returns to the Donmar Warehouse following his performances in Saint Joan, My Night with Reg (also Apollo), The Dark and Frame 312. Theatre credits include Kick for Touch (Sheffield Theatres), Mojo and Peaches (Royal Court) and A Midsummer Night’s Dream and Macbeth (Regent’s Park Open Air Theatre). Television credits include Casualty, Doctor Who, New Tricks, No Angels, The Coroner and Judge Jon Deed. Film credits include All of Nothing, Night in Hatton Garden and Topsy-Turvy.

Jackie Clune (Pompey) returns to the Donmar Warehouse following her performances in Julius Caesar and The Vote which was also screened live on More4, as well as Henry IV and The Tempest including their St Ann’s Warehouse transfers. Theatre credits include Utility, Fallen Angels, Candide, 9 to 5, Mogadishu, Billy Elliot, Julie Burchill is Away and Showstopper. Television credits include Good Omens, Borderline S2, Motherland, Three Girls, Borderline, Breathtaking, The Bill, EastEnders and Waking the Dead. Film credits include Jawbone and Denial.

Jack Lowden (Angelo) makes his Donmar Warehouse debut in Measure for Measure. His theatre credits include Ghosts (Almeida and West End) for which he received both the Olivier Award for Best Supporting Actor and the Ian Charleson Award, Chariots of Fire (Hampstead Theatre and West End), and Blackwatch (Barbican). Jack’s television credits include War and Peace, The Passing Bells, The Tunnel, Mrs. Biggs, Blue Haven and Being Victor. His work on film includes the forthcoming motion pictures Mary Queen of Scots, directed by Josie Rourke and Fighting With My Family, directed by Stephen Merchant. Further film credits include Dunkirk, England is Mine, Denial, A United Kingdom, Tommy’s Honour, Calibre, ’71 and uwantme2killhim?

Anwar Russell (Thomas) makes his Donmar Warehouse debut in Measure for Measure. Theatre credits include The Lion, the Witch and the Wardrobe (West Yorkshire Playhouse), Out of this World with V-Tol and Imogen (Shakespeare’s Globe), The Drowned Man with Punchdrunk and Can We Talk About This? with DV8 Physical Theatre (National Theatre) and Mischief with Theatre Rites (Broadway). Film credits include The Mummy, World War Z and Sunshine on Leith.  Anwar choreographed Spring Awakening (Royal Conservatoire Scotland / Dundee Rep), was assistant movement director on Passing Places (Dundee Rep) and co-directed the 2016 Brighton Fringe Award winning show It Started With Jason Donovan.

In person Mon-Sat, 10am-curtain up (with some exceptions, see website)

Allocations of tickets from £10 will be made available on Monday every week for performances within the following three weeks. Tickets will be available across the auditorium at every price band.

STANDING TICKETS
£10 standing tickets available every day from 10am online, by phone and in person. (Except Press Nights. The Box Office may be closed on certain dates, see website for details.)

Free tickets for those aged 25 and under. Tickets will be released on the last Friday of each month at noon for the following month. For an opportunity to secure free tickets and for more information, sign up to the mailing list: http://www.donmarwarehouse.com/visit/young-and-free

ACCESS
The Donmar Warehouse is fully wheelchair accessible. Guide dogs and hearing dogs are welcome in the auditorium. There is an infrared system in the main auditorium and there is also a hearing loop in the box office.

ASSISTED PERFORMANCES
If you require a companion to attend the Donmar, their ticket will be free. To book call 020 3282 3808 or email access@donmarwarehouse.com
For all other access enquiries or bookings call 020 3282 3808