The Comedy About A Bank Robbery @ Criterion Theatre 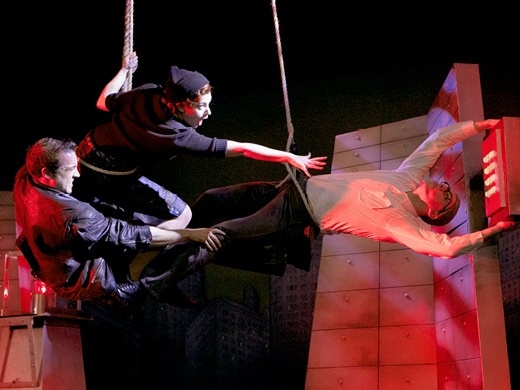 It’s a happy 2nd birthday to Mischief Theatre’s The Comedy About A Bank Robbery, the laugh-a-minute farce has just announced an extension that will see it into its third year entertaining crowds in Piccadilly Circus.
Mischief made their names of course with the juggernaut The Play That Goes Wrong and followed it up with a similar piece around an Amdram performance falling apart at the seams. For this production though they chose to go in a new direction and create a more traditionally structured farce.
We’re in Minneapolis in the late fifties, a town full of crooks and all with their eye on a giant diamond being stored in the local bank. A hardened criminal and a crooked warden are headed to town from Canada, a local pickpocket and a confidence trickster are both working their schemes and the bank manager is being watched by the FBI.
It’s fast-paced, frenetic fun of the highest order with some wonderful set pieces and stunts, including a fantastic moment where you see the bank office from above that has to be seen to be believed!
The whole is held together by a string of wonderful performances from a superb ensemble cast who all show more energy in a single performance than I can summon in a year! Of particular note are Jenna Augen whose excellent comic timing and beautiful singing voice are a joy to take in, Holly Sumpton who gives an incredibly assured performance despite this being her first professional role and Chris Leask who plays ‘Everyone Else’ an eclectic variety of roles that span from amorous octogenarian to Bobcat Goldthwaite-esque bank guard.
Mark Bell and Nancy Zamit’s direction doesn’t leave the cast or audience a minute to breathe but although this rattles along at a breakneck pace it’s a delight to take in!

Currently booking until November, for more info head to http://www.thecomedyaboutabankrobbery.com/

One thought on “The Comedy About A Bank Robbery @ Criterion Theatre”