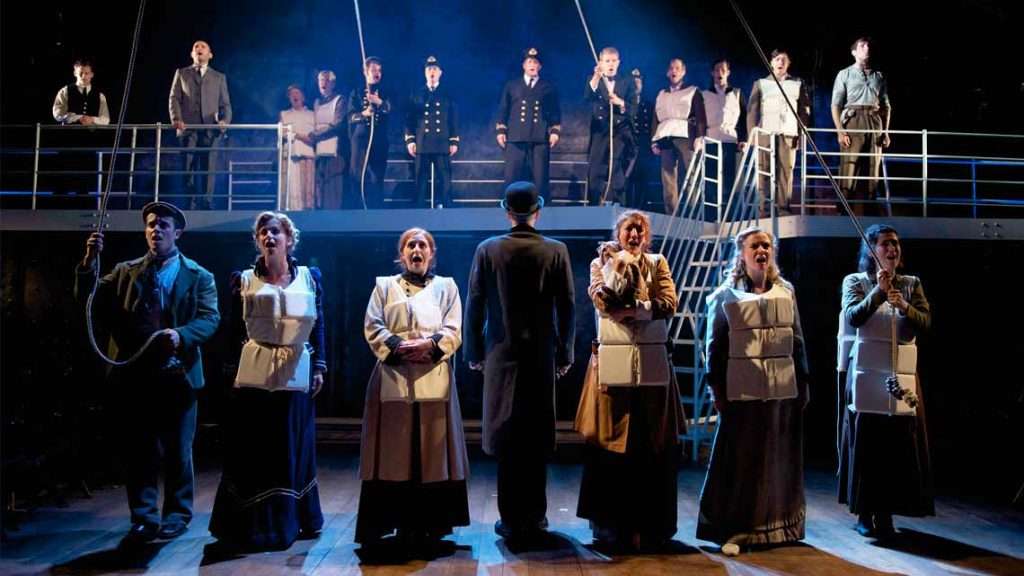 Hot off the presses, one of our favourite musicals and most anticipated shows of 2018 has just announced full casting! Read on to find out who is setting sail from Southampton!

Casting has been confirmed for the first ever UK & Ireland Tour of Titanic The Musical. Directed by returning director Thom Southerland, 25 actors from across the country will take the production on its maiden UK and Ireland tour, to visit the cities and communities whose forebears built, manned and sailed on the famous ship. The tour will start at Mayflower Theatre from 12 April – 21 April 2018.

In the final hour of 14th April 1912, the RMS Titanic, on her maiden voyage from Southampton to New York, collided with an iceberg and ‘the unsinkable ship’ slowly sank. It was one of the most tragic and infamous disasters of the 20th Century. 1517 men, women and children lost their lives.

Based on real people aboard the most legendary ship in the world, Maury Yeston and Peter Stone’s stunning musical focuses on their hopes and aspirations. Unaware of the fate that awaits them, the Third Class immigrants dream of a better life in America, the newly-enfranchised Second Class dream of achieving the lifestyles of the rich and famous, and the millionaire Barons of the First Class dream of their mastery lasting forever.

Maury Yeston commented on the cast of the UK tour: “The idea that a troupe of actors will tour this show in the UK, birthplace of the ship, where the workers of Belfast, the cabin boys and maids and stewards from Liverpool, the officers and crew, the stokers and stevedores from the Midlands all created a miraculous floating city, means more to me than I can say. I am touched that, musically, Titanic will finally be coming home, sung by the grandchildren and great-grandchildren of its builders – touched, and forever grateful.”

Opening at the Mayflower Theatre, Southampton in April 2018, the critically acclaimed, multi award-winning production will transfer straight to Belfast, where the ship was constructed. From there, Titanic The Musical will visit 13 theatres nationwide.

“It’s an evening both shattering and gorgeous…

The day after seeing it, I went back to see it again. It’s that good.”

Having received its UK premiere in 2013 at Southwark Playhouse, the production returned to London in 2016 for an 11-week season at the Charing Cross Theatre, where it won overwhelming critical acclaim.

Titanic The Musical has music and lyrics by Maury Yeston (Nine, Grand Hotel, Phantom) and a book by Peter Stone (Woman of the Year and 1776). The pair have collectively won, including their previous works, an Academy Award, an Emmy Award, an Olivier Award and three Tony Awards for their works. The original Broadway production of Titanic The Musical won five Tony Awards, including Best Musical, Best Score and Best Book.

Titanic The Musical is produced by Danielle Tarento, Steven M Levy and Vaughan Williams, in association with Mayflower Theatre, Southampton.