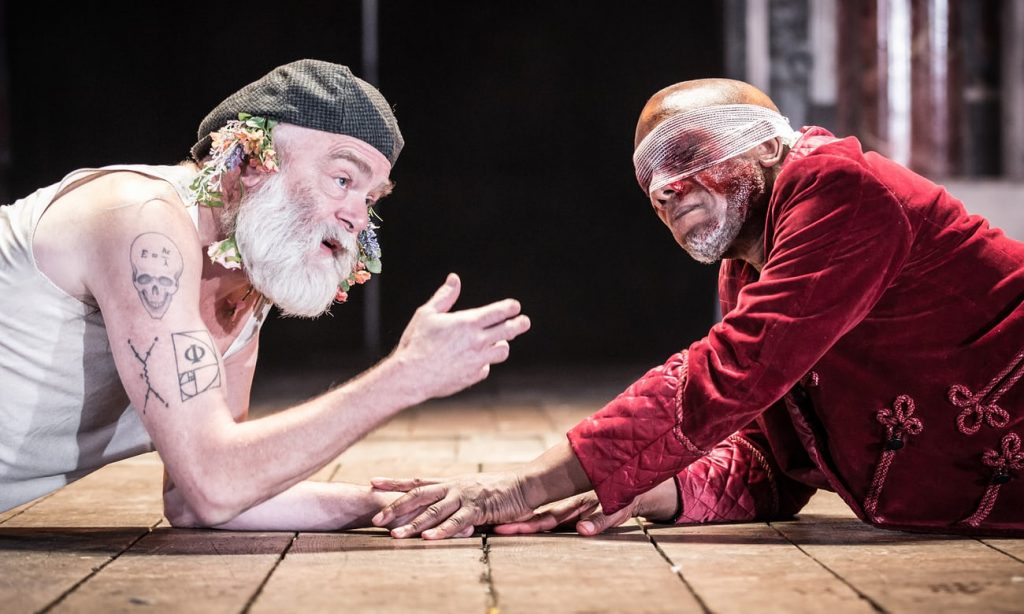 It’s somehow fitting that the last Shakespeare of Emma Rice’s final (summer) season is King Lear. A play that shows us how the established world can change based on one rash decision will certainly have some resonance at a venue who made the decision to terminate Rice’s employment as Artistic Director so early on.
Somehow it’s also fitting that, like a number of the productions of the last two years, (a lacklustre Macbeth and flawed retelling of Cymbeline last year, a truly terrible Romeo & Juliet to open this season) it fails to satisfy.
The piece is framed by dirty, bedraggled characters (homeless people, refugees – it’s never quite clear) finding themselves on a boarded up stage and proceeding to break their way in before performing a short physical-theatre preamble to fill in the gaps of what happens before the play begins. It’s an idea that has some merit but is then dropped in favour of a simple approach to the piece. With Nancy Meckler in the director’s chair I was hoping for something fresh and exciting but this feels like a rough sketch rather than the finished article.
Kevin R McNally is a fine Lear, as prone to jollity as he is to fits of anger. He owns the stage of the Globe and fits the role like a glove. It’s all the more disappointing then that such a great central performance is surrounded by some completely perplexing ones. Saskia Reeves’ timid Kent and Loren O’Dair’s incredibly annoying Fool are the chief offenders but the majority of characters are under baked and over acted.
The whole piece feels flat, quiet and underwhelming. Even Gloucester having his eyes plucked out fails to resonate emotionally. When McNally leaves the stage it’s almost as if the entire production ceases to have any spark to it.
We can only hope that Michelle Terry takes the opportunity to breathe new life into productions when she takes over, emphasising substance over style!

At Shakespeare’s Globe until 14th October.