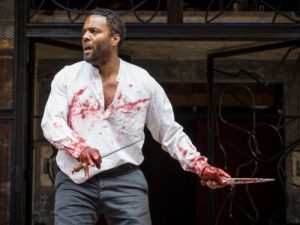 Like most of Shakespeare’s tragedies Macbeth works best when viewed on the strength of the relationships between its characters. Sure the blood and guts murders are ways to get bum on seats but even with a literal thunderstorm overhead foreshadowing the tumultuous effects of Macbeth’s actions it all boils down to a marriage made strong by the pursuit of power.

How disappointing then that Ray Fearon’s forceful Thane just doesn’t gel with his wife. Tara Fitzgerald makes for an oddly dispassionate Lady Macbeth which only serves to make her actions nonsensical. If she’s not bound to her husband in such a fervent manner why would she dive headlong into such an insane plan?
Iqbal Khan’s production makes a number of odd choices, not least in adding a fourth witch for no apparent reason. In line with other productions in this “Wonder Season” he throws in a bunch of modern references including mention of the referendum and Donald Trump, delivered in the main by Nadia Albina whose attempts at humour fail to hit the mark and worse bleed into the scene where Macbeth reveals he has killed Duncan, destroying the tone of suspense in the process.
In a season pushing the boundaries of what The Globe is and what it can be this feels all too much like an idea that has been loosed on the public without being fully formed.