An Enemy Of The People @ Chichester Festival Theatre 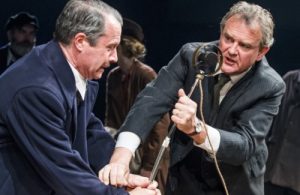 There is a stark, depressing, inevitability to Henrik Ibsen’s An Enemy Of The People. He rather masterfully makes us believe that one man can make a difference if he is morally right before pulling a 180 degree turn by introducing money into the decision making process of his characters. It is perhaps a more striking play given the current political climate and a timely piece for Chichester Festival Theatre to put on.
Central to the story is Dr Stockmann, the local GP and somewhat of a scientist who realises that the spa baths, the pride and joy of his town, are perhaps not as they might seem. Hugh Bonneville, making a long awaited return to the stage, plays the role to perfection with a mix of zealous need to do what is right and just a touch of egotistically needing to be seen as the man leading the charge. 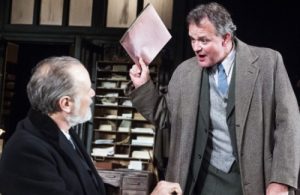 It’s a nice piece of direction from Howard Davies that in a play where everyone seems to be moving with purpose and speed, a blur of motion, Bonneville just glides. It provides a nice juxtaposition and a building point to the moment when he finally realises he is no longer being supported and becomes frenzied himself.
Bonneville’s performance is central to the piece working and he rises to the task superbly, though there are some fine performances for him to work off, notably from William Ganimara as Stockmann’s brother who has become the mayor of the town and Adam James’ sleazy newspaper editor who plays all sides off for his own gain.
The only flaw, and I suspect it will depend entirely on where you sit, is in the penultimate scene when the townsfolk flock to hear what Stockmann has to say and the auditorium fills with a chorus of performers who (at least in the section where I was) seem to want to deflect from what is actually happening onstage by constantly repeating the same interjections in a multitude of tones and at any opportunity.
Still, in the final scenes, as the town turns on the man they previously loved, it’s a chilling reminder that money somehow always wins out!