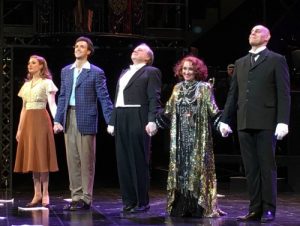 It isn’t often that you can sit in the theatre and be certain, before the show begins, that you are about to bear witness to something special that will be talked about by theatre fans for years to come!
I’ll be honest, when I heard a few days ago that Glenn Close was going to miss a performance this week I suspected she would be absent for the Saturday matinee I was to attend. It was a little frustrating – we might not have rushed for tickets without Close’s name attached – but nonetheless I was intrigued to head along as the cast was very good even without Glenn and I’d heard good things. Of course we have one of Andrew Lloyd Webber’s best scores (equalled, in my eyes, only by Phantom) and a cracking story.,.. but it’s nothing without the right performers!
Then Ria Jones donned the turban & sunglasses and the West End went wild. Secretly I was hoping to see Ria myself and was elated when posters around the Coliseum proclaimed she would once again be performing her Norma Desmond.

Prior to the show starting one of the production team stepped out onstage to apologise for Close’s absence but pointed out that Jones had performed the previous two nights to great acclaim and a rousing cheer swept through the audience (barring one curmudgeonly heckler demanding a refund). Throughout the afternoon Jones, a diminutive figure with a big powerful voice, surprised me. She stalked the stage, eyes wide, but her love for Joe was totally believable even among her larger-than-life characteristics. Of course when your first number is With One Look you have a bit of an advantage, but by the time we’re treated to As If We Never Said Goodbye I’m not ashamed to say I was tearing up…. Magnificent!
Before today I knew she was good but by the time I left the theatre I was sure of one thing… Ria Jones is a star!
But let’s not dwell just on Jones. The cast here is a very strong one throughout. Michael Xavier is an excellent Joe Gillis, charming and charismatic. He gets his own cheer at the opening of Act Two when he emerges from the orchestra pit clad only in skimpy blue swimming trunks, most of the ladies (and a good number of the men) in the audience swooned noticeably.
I didn’t know much about Fred Johanson before going into the show but his reverberating bass vocal and haunting presence made Max a scary, but sympathetic figure. Siobhan Dillon makes for a perky but worldy-wise Betty Schaefer too.
There are some great performances in smaller roles here as well, Haydn Oakley makes the normally sad-sack Artie an interesting character and Julian Forsyth is perfect as an aging but still authoritative Cecil B DeMille.
The English National Opera orchestra play a huge part in making this such a special production too, a character in their own right they occupy centre stage as the cast perform in front and above them on criss-crossing gantries and staircases. Lonny Price makes the most of his set and has some nice directorial touches, notably in the car chases and the stalking manner in which Norma patrols the stage. A special nod too to Stephen Mear whose choreography is, once again, wonderful. He makes the most of a sometimes too-tight stage and the funnier numbers (The Lady’s Paying, A Little Suffering) simply dazzle!
If you grabbed tickets to see this, whether with Close or (if you’re really lucky) you are surely in for a rare treat. I just feel sorry for the few who have decided not to attend in Glenn Close’s absence…they’ll never know what they’ve missed!

Huge thanks to Kevin Wilson (http://www.kevinwilsonpublicrelations.co.uk/) for the use of his photos. Check him out on twitter: @KevinWilsonPR