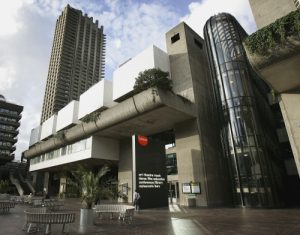 Following the four Shakespeare history plays, King & Country: Shakespeare’s Great Cycle of Kings, which kicked off 2016 at the Barbican Theatre, the touring production of A Midsummer Night’s Dream: A Play for the Nation visits the Barbican for a week of performances in May, with London amateurs from the Tower Theatre joining the cast as the Rude Mechanicals, and pupils from Eastbury Community school and Beam Primary school in Barking and Dagenham playing Titania’s fairy train.
Six other RSC productions will play in London during the 400th anniversary year of Shakespeare’s death, including two shows from the Company’s current Swan Theatre repertoire, alongside the RSC’s long-running production of Matilda The Musical in the West End.
The Alchemist and Doctor Faustus will transfer from the Swan Theatre into the Barbican from late August and play in repertoire from the beginning of September for a four week run, with the same cast directed by Polly Findlay and Maria Aberg respectively.
They will be followed by Cymbeline and King Lear transferring direct from the Royal Shakespeare Theatre at the end of October for an eight week run in repertoire, directed by Melly Still and Gregory Doran respectively.
Catherine Mallyon, RSC Executive Director said today; “I am thrilled that we are able to share so much of our work with audiences in London this year, with a total of twelve productions playing at the Barbican and the West End.
“Our work in the wonderful Swan Theatre has often missed out in transfers, so I am glad that Maria Aberg’s Faustus and Polly Findlay’s Alchemist will play at the Barbican, along with our two epic Shakespeare plays Cymbeline and King Lear.
“I am also delighted about our revival of Christopher Luscombe’s heart-warming Lost and Won double bill, Love’s Labour’s Lost and Much Ado About Nothing, at the Haymarket – with Edward Bennett reprising his roles as Berowne and Benedick.”
Toni Racklin, the Barbican’s Head of Theatre said: “Continuing our ongoing collaboration with the RSC we are thrilled that Polly Findlay, Melly Still and Maria Aberg make their Barbican debuts and we look forward to welcoming back Gregory Doran and Antony Sher with their highly anticipated new production of King Lear. This bumper autumn season sees two clever pairings of work by Shakespeare and his contemporaries from two of the RSC’s Stratford-Upon-Avon stages.”
Jonathan Church, Artistic Director of Chichester Festival Theatre said: “We are delighted to be welcoming the Royal Shakespeare Company to our stage this autumn with the ingenious pairing of Love’s Labour’s Lost and Much Ado About Nothing,and to be collaborating with the RSC and the Haymarket to transfer the productions to London – particularly in this 400th anniversary year of Shakespeare’s death.”

Each discussion will explore the actions of King Lear through the eyes of one of his most loyal subjects. Actors in the roles in current and past productions discuss the relationship of The Fool, Cordelia and Kent with the eponymous king, all three remaining devoted to him as his kingdom falls apart.