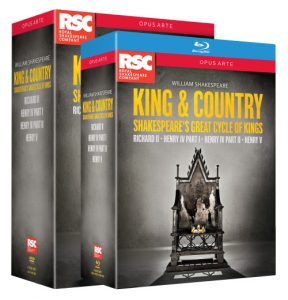 I’m a relatively new convert to Shakespeare. Going to an all-boys secondary school in the mid-nineties there was very little focus on arts subjects and it put me off the bard for a long time. Even when I finally started going to see productions of Shakespeare’s plays I was wary of the Royal Shakespeare Company. These were the protectors of the canon and surely would be the toughest to truly appreciate!
Then I saw Antony Sher as Falstaff…
The first time he stepped out on stage in Gregory Doran’s stunning production I was hooked. Then and there I became a fully-fledged Shakespeare-phile, needing a regular fix to fuel my addiction.
Naturally when Sher’s co-star Alex Hassell put on the crown to play Henry V I couldn’t wait to head along (in fact, I saw it twice in a week at the Barbican – you can read my review here) .
But how do the plays translate to the small screen? Surprisingly well actually. The RSC’s theatre is tailor made for filming a production with the thrust stage allowing for a variety of angles ensuring the cameras really catch every emotion – both from the actors and the audience.
There’s a nice continuity with some actors cropping up regularly across the plays (such as the wonderful Oliver Ford Davies who crops up time and again, but most notably as a gloriously crotchety Chorus in Henry V) and who make their fellow performers such as Sher stand out all the more.
This then is a tale of kings, from David Tennant’s aloof and ethereal Richard II who is so removed from his people he doesn’t see he is causing his own downfall to the pious and vengeful Henry IV, a bombastic Jasper Britton torn between remorse for what he did to his predecessor and disappointment in his wayward son.
With a range of extras including interviews and incredibly insightful commentaries this really is a must have set for any of my fellow Shakespeare fans!