Travels With My Aunt @ The Spring, Havant 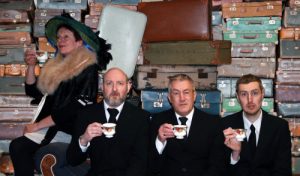 Travels With My Aunt is a popular choice this year… Since Humdrumannounced this production at The Spring a musical adaptation has been scheduled as part of the new Chichester Festival Theatre season and a touring production will be visiting Winchester.
So what makes Graham Greene’s novel so ripe for the stage? Well it’s a story that for all its whimsy we can all relate to on some level, finding ourselves stuck in our existence and longing for adventure. I think all of us can look back to events and moments that have changed the course of our life.
Giles Harvegal’s adaptation, in the capable hands of director Caz Gilmore, takes a novel approach (all 5 actors are playing Henry Pulling as he plays the other characters) and makes it really work. The layout of the stage – mannequins and busts littered about liberally wearing hats, scarves, stick on facial hair and other ephemera used to create the idea of different characters – really helps keep the action moving without unnecessary levels of set design. There’s great use of projected captions too.
Jeanette Broad makes for a marvellously dotty Aunt Augusta, seemingly whimsical but with a will of iron and a lax interpretation of the law, though all the Henry’s get a chance to shine. Mike Palmer’s spaced out backpacker is great and it adds to the farce when he later pops up playing her father too! Ben Counter’s booming African consort Wordsworth is a particular delight withPeter Colley’s hotel receptionist the most wonderfully odd creation. The scene-stealer here though is John Moore who shows a picture is worth a thousand words in a pair of hilarious moments involving a photo frame and a box of acceessories.
This is a charming, bonkers, whimsical and ultimately rather touching production so head along and surrender to the eccentricity!