The BFG @ The Spring, Havant 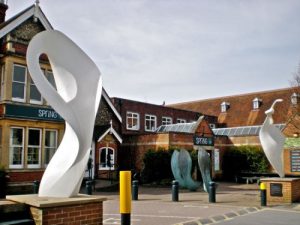 The BFG is perhaps the most beloved of Roald Dahl’s brilliantly twisted stories for children (though theatre fans may have fallen for Matilda in recent years). It’s certainly one that people keep coming back to as the forthcoming movie adaptation (starring Mark Rylance – which excites us a great deal) will attest. I’m fascinated to see how Humdrum bring such a big story into the confines of The Spring’s cosy studio theatre.
Sam Sampson has a good track record with Christmas shows and has dipped into the Dahl well before with a delightful take on George’s Marvellous Medicine. He’s at the helm again here and his direction makes the most ofDavid Wood’s adaptation, utilising the concept of a birthday party turning into a performance of the book to help us immediately accept adults playing child roles.
As the titular giant James George revels in the tongue-twisters and malapropisms of the script and makes the giant just friendly enough without being too silly and cartoonish. He works brilliantly with Emma Wells’ Sophie. She brings an adult sensibility to the role I’ve not seen before, making the girl wise beyond her years. Wells is also a dab hand at acting through the doll that is used to represent Sophie in her interactions with giants. It’s tough to emote through a ragdoll but she does so brilliantly.
The rest of the cast flit between family members, tertiary characters and the evil, child-eating giants. Here they all excel and clearly revel in being just scary enough to force the younger children in the audience onto their parents laps without reducing any of them to tears.
There are some wonderful characters that creep through too. Peter Colley is superb as a flouncing, limp wristed Head of The Air Force while Kerri Jeffreychannels her inner Agnetha as the Queen of Sweden. A special mention too forJohn Moore who reduces the audience to hysterics without saying a word in a hilariously slapstick entr’acte.
In a wonderful, heart-warming move Humdrum regular Caz Gilmore adds a live sign language translation to each performance, including some lovely improvisations (I can now sign “snozzcumber”)!
The script is admittedly a little unbalanced in places, with a second act barely longer than the interval and a first act that takes a little while to get going, but once we enter the story proper the time flies by and the play seems to end all too soon, which isn’t something you can say often!
I’m an avowed fan of Dahl and something about his whimsy suits this company down to the ground, so here’s hoping they bring us more in future festive seasons… how about The Witches folks?