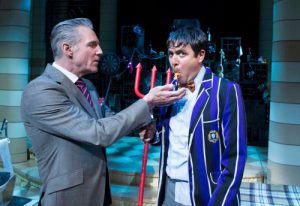 Dirty Rotten Scoundrels was last year’s must-see musical in the West End, with audiences and critics lapping up the jokes and raving about Robert Lindsay’s performance. Predictably I didn’t see it, but when it closed I felt pretty sure it would be out on tour before too long so I made a point to catch it at The Mayflower and see what all the fuss was about.
I can only assume that the excitement was more around the return of Lindsay to the stage than for the show itself which, on this evidence is packed with a series of instantly forgettable tunes and a script that takes a good 30 minutes to get going.
Thankfully we’re  treated to some good performances with Michael Praed glorious as the suave shyster who is the king of the Riviera. In between admiring himself in every mirror he passes he finds time to take Noel Sullivan’s uncouth grafter under his wing.
Praed is wonderfully arch and urbane in a role that could all too easily be plodding and he works well with Sullivan who is as energetic and full voiced as we’ve come to expect (I’m yet to see him get through a show without breaking down with laughter, which should probably be getting annoying by now but he somehow makes it an endearing fault). Carley Stenson is enjoyable as the woman who comes between them and isn’t all she might seem.
The show is based of course on the 1988 movie and is styled in a wonderfully retro fashion which would work perfectly were it not for lyrics which constantly reference the modern day. It’s tough to suspend disbelief when characters are singing about Obama one minute and then later someone has to be contacted by letter.
Thankfully, when things are good they are superb. Ruprecht is far and away the funniest moment of the night and our two leads perform it admirably.
Elsewhere Mark Benton gives a typically reliable performance as Praed’s confidant and its clear that the performers here are loving every minute they are on the stage.
For me though, this is a show that doesn’t quite hit the mark. Jerry Mitchell provides solid direction and some joyous choreography (especially the revolving hats of Praed’s first number), but he’s let down by David Yazbek’s tepid, unremarkable songs. Despite that though, you’ll leave with a smile on your face because the fun onstage carries over to those of us off it.