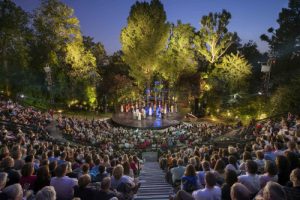 Regent’s Park Open Air Theatre has confirmed that Michael Morpurgo’s Running Wild will open its 2016 season in an adaptation by Samuel Adamson, running from 13 May – 12 June.  In a co-production with Chichester Festival Theatre, who originally created the piece with their youth theatre, Regent’s Park Open Air Theatre will fully develop the play to launch its professional premiere. Timothy Sheader and original Chichester director Dale Rooksdirect with puppetry design and direction by Finn Caldwell and Toby Olié, both previous Associate Puppetry Directors on War Horse.

Running Wild is a story of love, loss, loyalty and of living for the moment. For Will and his mother, going to Indonesia isn’t just a holiday. It’s a new start, and the chance for Will to ride an elephant called Oona. But then the tsunami hit. Charging deep into the jungle Oona escapes the beach, but with her rider still clinging on, Will must now learn to survive the rainforest – and he is not alone.
To commemorate the legacy of Shakespeare, 400 years since the playwright’s death, Robert Hastie will direct Henry V from 17 June – 9 July. Currently an Associate Director for the Donmar Warehouse, Robert recently received critical acclaim for Splendour by Abi Morgan andMy Night With Reg, which subsequently transferred to the Apollo Theatre.
Celebrating 45 years since Tim Rice and Andrew Lloyd Webber’s seminal musical first hit the stage, Timothy Sheader will direct Jesus Christ Superstar from 15 July – 27 August.  With a legendary score including ‘I Don’t Know How to Love Him’, ‘Gethsemane’ and ‘Superstar’, this epic story with choreography by Drew McConie will find a new resonance in the unique surroundings of Regent’s Park Open Air Theatre.
The 2013 sell-out production of Jane Austen’s Pride and Prejudice, adapted for the stage by Simon Reade and directed by Deborah Bruce, will conclude the 2016 season (2 – 17 September).  Following the success of To Kill a Mockingbird and Lord of the Flies, Pride and Prejudicewill then embark on a major UK tour.
Regent’s Park Open Air Theatre’s critically acclaimed production of Lord of the Flies continues to tour the UK through to March 2016.

‘In a year when the world celebrates the life and work of Shakespeare, our 2016 season champions British writing. Whilst giving classics a new voice through outdoor production, I am delighted to be bringing a new play, Running Wild, to the stage this season. I am passionate about storytelling and of creating work that enhances the shared experience of theatregoing, and I look forward to sharing these productions with our audiences.’

Full cast and creative team for all 2016 productions will be announced in due course.

Regent’s Park Open Air Theatre Memberships are on sale now and priority booking for Members will open at 11am, 12 November. Visitwww.openairtheatre.com/membership for more information. Public booking opens at 11am, 8 December.