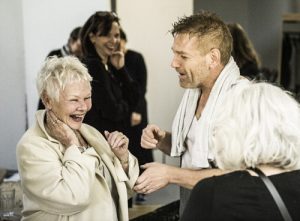 Rehearsals are now underway for the Kenneth Branagh Theatre Company’s Plays at the Garrick season. The Winter’s Tale will play in repertory alongside the Rattigan double-bill of Harlequinade / All On Her Own from 17 October 2015 until 16 January 2016.

The Winter’s Tale, Shakespeareʼs timeless tragicomedy of obsession and redemption, is reimagined in a new production co-directed by Rob Ashford and Kenneth Branagh following their triumphant staging of Macbeth in Manchester and Manhattan. Judi Dench will play Paulina opposite Kenneth Branagh as Leontes. Judi Dench will not be appearing in Harlequinade / All On Her Own.

In addition to playing Dame Maud in Harlequinade, Zoë Wanamaker will also perform Terence Rattigan’s dramatic monologue All On Her Own, which has never before played in the West End. In this brief but powerfully atmospheric play, which will be staged every evening prior to Harlequinade, a woman with a secret, alone at midnight in London has a burden to share that is at times both heart-breaking and sinister. Zoё Wanamaker will not appear in The Winter’s Tale.

In the rarely seen comic gem Harlequinade, a classical theatre company attempts to produce The Winter’s Tale and Romeo and Juliet, while the intrigues and dalliances of the company members are accidently revealed with increasingly chaotic and hysterical consequences. Kenneth Branagh will play Harlequinade’s actor-manager Arthur Gosport in addition to co-directing the production with Rob Ashford.

The Winter’s Tale, Harlequinade / All On Her Own, The Painkiller, Romeo and Juliet and The Entertainer make up the inaugural season of work for the Kenneth Branagh Theatre Company.