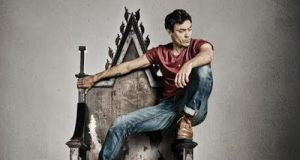 It won’t shock any of our readers to hear we’re very excited about The RSC presenting Henry V as part of their winter season. Their Henry IV was a highlight of 2014 and both productions, alongside the acclaimed Richard II from a few years back, head to London for an exciting run of the “Henries” cycle!
Gregory Doran, RSC Artistic Director, continues his exploration through Shakespeare’s History plays as he directs Henry V, opening in Stratford-upon-Avon, before being broadcast to cinemas and transferring to the Barbican in London.
Alex Hassell, who played Prince Hal in both productions of Henry IV and recently played Biff Loman in Doran’s production ofDeath of a Salesman, plays the title role of King Henry.
Doran’s History tetralogy culminates in January 2016 at the Barbican in London, with a major theatrical event marking the start of the 400th anniversary year of Shakespeare’s death, King & Country, a complete 4-play season cycle of Richard II, Henry IV Parts I and II and Henry V playing in repertoire. Following the Barbican season, Henry IV Parts I and II and Henry V tour to China and are then re-joined by Richard II in Spring 2016 for an exclusive season in the US, at the Brooklyn Academy of Music (BAM).
The RSC is delighted to announce J.P. Morgan as the Global Tour Premier Partner for all four productions. J.P. Morgan will be supporting the upcoming tour in the UK, US and China where the RSC will perform Shakespeare’s History Plays.
October 2015, also marks the 600th anniversary of the Battle of Agincourt whilst Henry V performs in Stratford-upon-Avon, bringing added resonance to the play which uses the battle as the famous centrepiece of Henry V’s reign.
With the start of rehearsals for Henry V, the RSC begins the first pilot in the initiative to produce new, theatrically viable, Chinese translations of all Shakespeare’s 36 plays, to celebrate the 400th anniversary of the First Folio in 2023. The RSC will create the translations in collaboration with Chinese writers and translators, who will be embedded into the RSC’s rehearsal process. Professor Zhang Chong, from Shanghai’s Fudan University will be the translator for Henry V working alongside playwright and Deputy General Manager of Shanghai Dramatic Arts Centre, Nick Yu.
The full cast for Henry V includes: Daniel Abbott (Gloucester/Monsieur le Fer); Martin Bassindale (Boy); Antony Byrne(Pistol); Sean Chapman (Exeter); Oliver Ford Davies (Chorus), Nicholas Gerard-Martin (Orleans/Bishop of Ely); Robert Gilbert (Dauphin); Alex Hassell (Henry V); Jim Hooper (Canterbury/Erpingham); Jennifer Kirby (Katherine); Jane Lapotaire(Queen Isobel); Sam Marks (Constable of France); Dale Mathurin (Bates/Bedford); Chris Middleton (Nym/Warwick/Governor of Harfleur); Evelyn Miller (Rambures/Lady-in-Waiting); Keith Osborn (Montjoy/Scroop); Sarah Parks (Mistress Quickly);Leigh Quinn (Alice); Joshua Richards (Bardolph/Fluellen); Simon Thorp (King of France); Obioma Ugoala (Grey/Gower);Andrew Westfield (Westmoreland/MacMorris) and Simon Yadoo (Cambridge/Williams/Jamy).
The Henry V Company will perform across all four plays of the King & Country cycle and are joined by David Tennant (Richard II); Julian Glover (John of Gaunt); Jasper Britton (Bolingbroke/Henry IV); Matthew Needham (Harry Percy/Hotspur/Mowbray) and Emma King (Lady-in-Waiting/Lady Mortimer/Doll Tearsheet).
The productions are designed by Stephen Brimson Lewis with lighting by Tim Mitchell. The music is composed by Paul Englishby with sound by Martin Slavin. The Movement director is Mike Ashcroft and the Fight director is Terry King.
Henry V will be broadcast ‘Live from Stratford-upon-Avon’ to cinemas in collaboration with Picturehouse Entertainment on 21 October 2015
To book tickets call 01789 403493 or online at www.rsc.org.uk