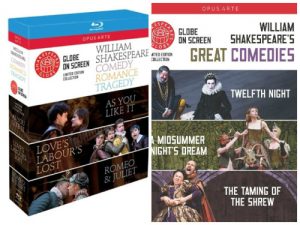 I’m constantly amazed that these days if I miss a major production of a play in the West End I can generally pop along to the local cinema and watch it there or even in some cases but a copy to watch at my leisure. As might be expected the UK’s two premier producers of Shakespeare have been at the forefront of filming staged productions and when two box sets of shows from Shakespeare’s Globe arrived a few weeks ago for review I was delighted to visit a number of productions that pre-date my time reviewing theatre!
The new Great Comedies box set contains a trio of superb productions. It’s headed up by the 2012 “original practices” production of Twelfth Night (okay, this production I did see, but not until it transferred to the Apollo) that eventually found its way to Broadway. Mark Rylance is exquisite as Olivia and Stephen Fry’s Malvolio is a treat, but it’s an ensemble performance without a single weak link.
Michelle Terry is the big name in A Midsummer Night’s Dream a wild interpretation with very pagan faeries and a memorably feisty relationship between Theseus and Hippolyta to mirror the tension between Oberon and Titania. It’s wonderfully earthy and the only downpoint is that it came so close on the heels of Michael Grandage’s new age production. The box set is rounded out by The Taming of The Shrew, a difficult play to bear with its blatant misogyny, but one that nevertheless has a pair of towering central performances from Samantha Spiro and Simon Paisley Day.
For a crash course in the bard’s work the Comedy, Romance, Tragedy box set is the perfect choice. Three productions that tick off the archetypes and that are, curiously, the only three Globe productions to be released on Blu-Ray.
Comedy is served by Thea Sharrock’s excellent 2008 take on As You Like It, headed up by Naomi Fredericks who is an excellent Rosalind, sure of her every move as she teases Orlando. There’s sheer bliss in Tim McMullan’s Jaques too, the sonorous requests for more songs are a delight in themselves.
Romance comes in the form of Love’s Labours Lost. Not the most thrilling of Shakespeare’s plays but ably performed by a cast that includes Michelle Terry and Philip Cumbus. Tragedy is provided by arguably the Bard’s most famous play: Romeo and Juliet. The aforementioned Cumbus is a fascinating Mercutio alongside Ellie Kendrick and Adetomiwa Edun as the “pair of star cross’d lovers”. It’s a fresh and engaging approach to a play that can all too easy become stale due to sheer familiarity.
Both sets are great examples of the bard at his best, but the latter raises the question of why more recordings haven’t been released in Blu Ray format. Nonetheless both should be appearing on your wishlists!