The Importance of Being Earnest @ The Mayflower, Southampton 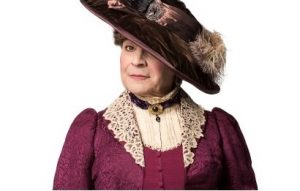 Okay, I’ll admit it, I went to the theatre to see an award-winning actor perform in a way you’d never expect of him… Not Bradley Cooper in the Elephant Man (though I did see that and I enjoyed his performance very much) but David Suchet stepping about as far away from the dapper Belgian detective with the distinctive moustache as we could reasonably expect!
Seeing a great actor donning a frock to play an iconic female role may have sold many of the tickets for this tour and its subsequent West End run, but a number of audience members at the Mayflower Theatre were here for the ageless wit of Oscar Wilde. All too often the droll one-liners overshadow the plot in a Wilde play and a few times The Importance of Being Earnest comes close but ultimately the cast choose not to dwell on the quips but instead keep the action whipping along at a good pace. Kudos to director Adrian Noble whose young and energetic leads perfectly complement their more experienced cast-mates.
Suchet is, of course, the major draw and his Lady Bracknell is a genuine treat… even when the dreaded handbag line looms large he maintains his composure and (finally) delivers the moment in a way that gets the laugh without stopping the scene dead. His performance is full of wonderful little nods to the audience and there’s a gleam in his eye when he makes his entrance and sashays downstage with impeccable poise and grace.
Thankfully this production isn’t being held together on star names alone.Philip Cumbus is wonderful as Algernon Moncrieff. Louche and wonderfully idle, he nonetheless is the axle on which the whole show spins. He flops about the set like a man for whom even the effort of standing up is incredibly tedious and he whips through Wilde’s dialogue without remorse, delivering each line beautifully without ever dwelling on them. He’s ably assisted by his old friend John “Earnest” Worthing, a young man who lives by one name in town and another in the country – a revelation that leads to a wonderful discourse about the art of Bunburying (look it up). Michael Benz is an excellent foil for Cumbus, wound tight and full of drive, they bounce off each other brilliantly.
John is in love with Algie’s cousin Gwendolyn, the daughter of Lady Bracknell, who declares she could only love a man named Earnest… and so our fun begins. Algie decides to delve into John’s prim and proper country life where he meets and falls in love with Worthing’s ward Cecily.
There are some lovely character moments, Imogen Doel’s Cecily is an air-headed treat and Michele Dotrice makes a gloriously dotty Miss Prism. From first entrance to last curtsy the stage belongs to David Suchet though!