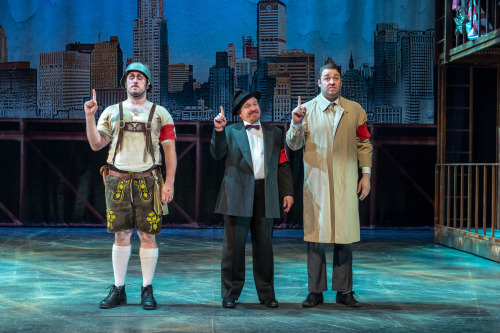 Ah, The Producers. Probably our favourite of the glut of movies turned musicals of the past decade or so. The original production was a wonder of un-pc satire that was far and away the best thing Mel Brooks had turned his hand to in years. More than ten years later and the show is well established in the canon of musicals that head out regularly on tour. Has familiarity dulled the humour of the piece?
Well… yes, sadly it has. The sight of camp Nazis goose-stepping about the stage as Hitler, bedecked in a dazzling gold sequinned jacket, sings about his life story is still hilarious. It no longer shocks though.
This is an all-new production, with a different set and approach that harks back a little more to the darker tone of the original film, but it’s a production hamstrung by its casting. Jason Manford and Ross Noble are two of the UK’s best known comedians and both of them have excellent timing but neither are actors and here it shows. Noble has some amusing moments as a nazi obsessed pigeon fancier, but in bellowing every line he removes what little subtlety there is in the character and some of his best lines are lost.
Manford, as Leo Bloom is one of the central characters and while he sings beautifully he’s out of his depth when acting alongside Cory English. The latter embodies Max Bialystock brilliantly, breaking out from a script crafted for Nathan Lane and giving his own performance. The disparity of experience is most clear in the penultimate scene when an errant pigeon falls from the rafters and Manford spends the next few minutes hiding his face from the audience as he struggles to control himself. English meanwhile cracks a grin and a look to the audience and carries on like a trooper! Indeed in Betrayedthere’s a wonderful moment as Max relives the whole show to that point, including enacting the interval, that leaves the audience out of breath so quickly does English rattle through the lines. He’s bell clear throughout though!
That’s not to say that either fail to incite laughs… they do that well enough but miss the potential for so many more. David Bedella is the opposite as super-camp director turned star Roger De Bris, inciting laughs even where there are no jokes in the script with the raising of an eyebrow or the flash of a Cheshire cat grin. He’s ably assisted by Stephane Anelli who ignores the running gag of Carmen Ghia’s sibilant ‘s’, but who minces and flounces and hams brilliantly. Tiffany Graves makes the most of Oola, giving us a fine mix of sexy and silly.
This is still a show that can sizzle, but long acquaintance has rendered it unable to shock in the way it once did. Nonetheless, we defy you to make it to the end without at least a few good loud laughs!