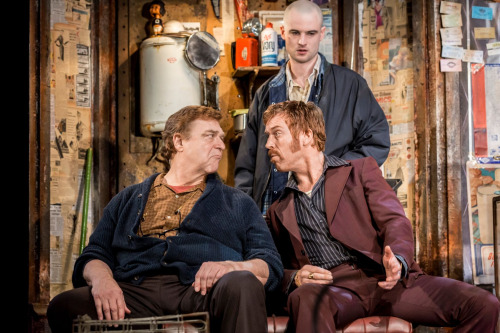 David Mamet is a playwright whose work is easy to appreciate but difficult to love. The complex wordplay is certainly an acquired taste, but when it’s performed well it can fly. Thankfully director Daniel Evans has three excellent performers at his disposal as he takes a look into the writer’s dissection of the rotting underbelly of the American dream!
Damian Lewis is the headliner here, the first name attached to the project and the one who will be most responsible for the amount of tickets sold. He plays Teach, a small time crook who inserts himself into a heist planned by junk shop owner Donnie Dubrow and Bobby, a young man with a clear problem who Don has taken under his wing. Teach convinces Don to cut the kid out of the deal, implying he is still using the drugs he has supposedly quit and driving a rift into the partnership that will see all three men mistrusting and accusing each other.
Teach is the flashy role here, a swaggering bum who believes himself somehow better than his peers and if I didn’t know any better I’d swear someone other than Damian Lewis was playing the role. He transforms himself completely. The Brooklyn accent feeds a nasal tone of voice and he wears it as comfortably as the plum coloured suit he’s draped in. By contrast Don is a vision of stillness, lumbering about the set in faded clothes and as slow on the uptake as Teach is quick to sow seeds of dischord. The role could easily be overshadowed except that John Goodman gives a masterclass in minimalist acting. He does nothing and yet everything and fits himself perfectly to the long pauses in the script.
The trio is rounded out by Tom Sturridge whose nervous energy and hunched stance remind us instantly that he’s dealing with the throes of a deep addiction and that Don has become the fulcrum of a world he is desperately trying to stabilise.
At times this play shines as bright as anything I’ve yet seen on a stage. The three actors embody their roles brilliantly and Evans’ spare direction ensures the script stays front and centre. This is also the downfall of the production though… the best patches of dialogue are perfect, but elsewhere there are some incredibly clunky moments that make you wonder if Mamet wrote something much shorter and then found he had to flesh it out!