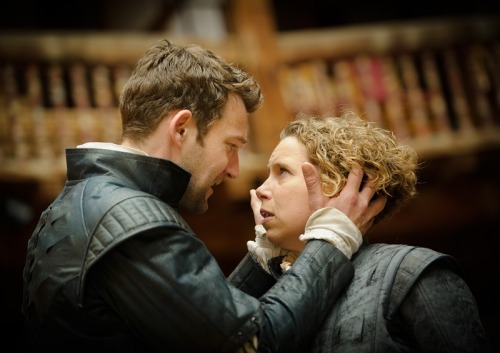 As You Like It is one of Shakespeare’s most divisive plays, critics and audiences seem to either love or hate it with little middle ground. It seems to be a favourite of Shakespeare’s Globe too, this being their third production in the last six years.
I arrived with high hopes, Blanche McIntyre’s Comedy of Errors last year was a sublime slapstick, but the jokes here are more subtle, coming from deft wordplay. Nonetheless McIntyre squeezes some great physical gags (and even a tap routine) into proceedings without overshadowing the zinging one-liners and rapid fire banter.
Michelle Terry shines as Rosalind, her first scene with Ellie Piercy’s Celia is a little flat, but thereafter they soar, bouncing off each other and launching into fits of infectious schoolgirl giggling. Simon Harrison makes for an engaging Orlando too and his scenes with Terry sizzle.
The biggest laughs are, as always, reserved for Touchstone and Jaques. As the former Daniel Crossley delivers witticisms with all the speed of a machine gun and does so far more accurately. His performance may be the closest to that of previous productions, but nonetheless he stands out by displaying a knack for physical comedy. Globe favourite James Garnon makes the normally melancholy Jaques a more rakish character, rather than bemoaning his existence he seems bemused by it. His delivery of the “All the world’s a stage” monologue is a masterstroke, rather than dwelling on his mortality he mocks Duke Senior’s observation that “This wide and universal theatre presents more woeful pageants than the scene wherein we play in.”
This typifies McIntyre’s approach to the whole production, respecting what has gone before but giving it her own spin. Sir Oliver Martext bustling onto the stage with a shopping trolley is but one example.
As You Like It contains more songs than any other of Shakespeare’s plays and this production takes them in a new direction. Johnny Flynn, folk singer and sometime actor at The Globe has set the songs to newly composed tunes giving them a modern but timeless air and William Mannering delivers them effortlessly as Amiens.
This then is a production full of little treats and a wonderful freshness. I suspect As You Like It will remain the marmite of the bard’s comedies, but I for one remain a firm fan of this pastoral delight!