The Merchant Of Venice @ Shakespeare’s Globe 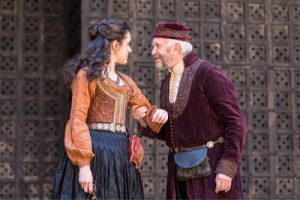 You could be forgiven, if you didn’t know The Merchant of Venice well, for believing it to be a tragedy and more so for thinking Shylock is one of Shakespeare’s most caricature villains. Thankfully Jonathan Munby directs with flair, amping up the comedy without losing even a hint of pathos in what may already be the highlight of Shakespeare’s Globe’s summer season!
At a time when anti-Semitic sentiment is reportedly on the rise it’s no surprise that we find, in the sublime Jonathan Pryce perhaps the most sympathetic and well-rounded Shylock yet to grace the stage. It helps that Munby gives us a preamble that shows just how denigrated Jews are by the wider Venetian society. We see masked figures beat and spit on an unsuspecting Hebrew and Shylock himself details the abuse he has suffered at the hands of the titular Antonio when the latter comes to him asking to borrow money.
It’s true that it’s still impossible to condone the contract that allows the money-lender a pound of Antonio’s flesh if he defaults, but you can at least understand the path that leads Shylock to this point!
Of course there’s much comedy to be found in the play too. Chiefly in the form of Stefan Adegbola’s Launcelot Gobbo who, midway through the first act, steals two members of the audience to perform an impromptu morality play as he decides whether or not to flee the Jew’s service.
Elsewhere David Sturzaker makes for a wonderfully witty Gratiano. He makes his entrance by lunging across the stage to vomit into a pale, but like so many of Shakespeare’s seemingly foolish sidekicks (Enobarbus springs immediately to mind) he often shows the flaws in our heroic leading men. In this case that would be Bassanio, who asks his friend Antonio for money to allow him to woo Portia. Dominic Mafham and Daniel Lapaine, as the lover and the merchant respectively, form an emotional pair, their fraternal bond is clearly strong and, on Antonio’s part at least, the relationship may well be perceived as more.
The ladies here are the equal of their male colleagues too. Rachel Pickupmakes for a wily Portia, as intelligent as she is smart, while Dorothea Myer-Bennett makes a big impression with the smaller role of the maid Nerissa. When the two are tricking their new husbands the glee is delightful, but both maintain the serious aspect of their characters wonderfully. The standout though, playing Shylock’s daughter Jessica is Pryce’s real life daughter. This marks the biggest role Phoebe Pryce has performed to date and she is wonderful. The epilogue, whereby Munby portrays the money-lender’s forced conversion to Catholicism while his daughter weeps for her own lost faith is heart rending!
This then is an uneasy comedy, a surprisingly upbeat tragedy and a worryingly pertinent warning about judging people by their beliefs. It’s also a masterclass in presenting a tricky text full of difficult subject matter for the audience. Munby and his cast manage it with aplomb!